- A idyllic jewel a Central America 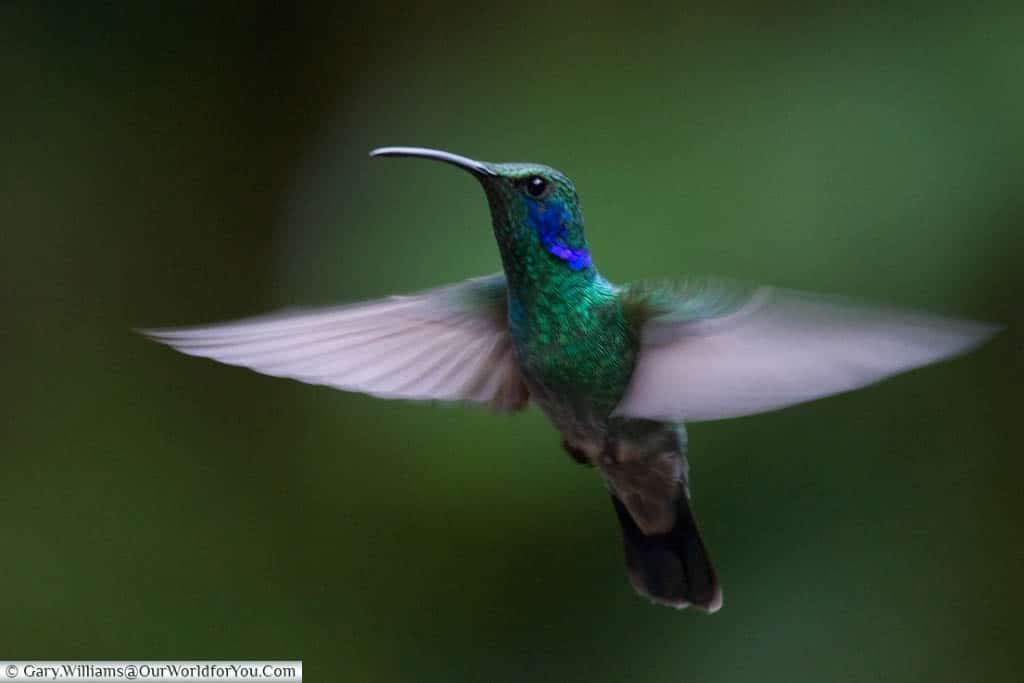 Our road trip around Costa Rica in November 2007 was fairly spontaneous and was only organised a couple of weeks before departure.

Gary was in San Jose on business, so we decided we would make the most of the opportunity and add a couple of weeks on the end to explore the country.

So I read various reviews on blogs and forums and I came across a local Costa Rican Travel company www.latitudesadventure.com . They made an extra effort to help us organize our accommodation and car hire for the road trip within 7 days.

This is the overview of the whole 12 night journey.

After a 16 hour journey from London to Costa Rica via Miami, I finally arrive in San Jose to meet Gary. To feel the lovely warm air at 9pm was fantastic, we had one night in San Jose ready for our adventure ahead.

The next morning, the car hire company met us at our hotel with the recommended 4X4 and also the GPS, which came in very handy.

After a detailed run down of the vehicle and the do’s and don’ts on Costa Rican roads (one of which I’ll come to later), we headed off on our 3 to 4 hour drive to Manuel Antonio, located on the Pacific Ocean side of Costa Rica.

Once out of San Jose the drive was more relaxing, the closer we got to Manuel Antonio the more rustic the roads became, particularly driving over old wooden bridges and clearly seeing the rivers flowing below. The scenery became more and more lush and it felt like light years away from the airports of the previous day.

If your heading off on your own Costa Rican adventure, than grab a copy of this DK Eyewitness book.

I love planning trips and these guides are so helpful.

I find them extremely informative, easy to follow and the pictures and maps tempt you into discovering more.

Our accommodation was the Hotel Parador, Manuel Antonio.

When you arrive at your hotel, and you glance across at a view like this, you know it’s going to be a special stay. 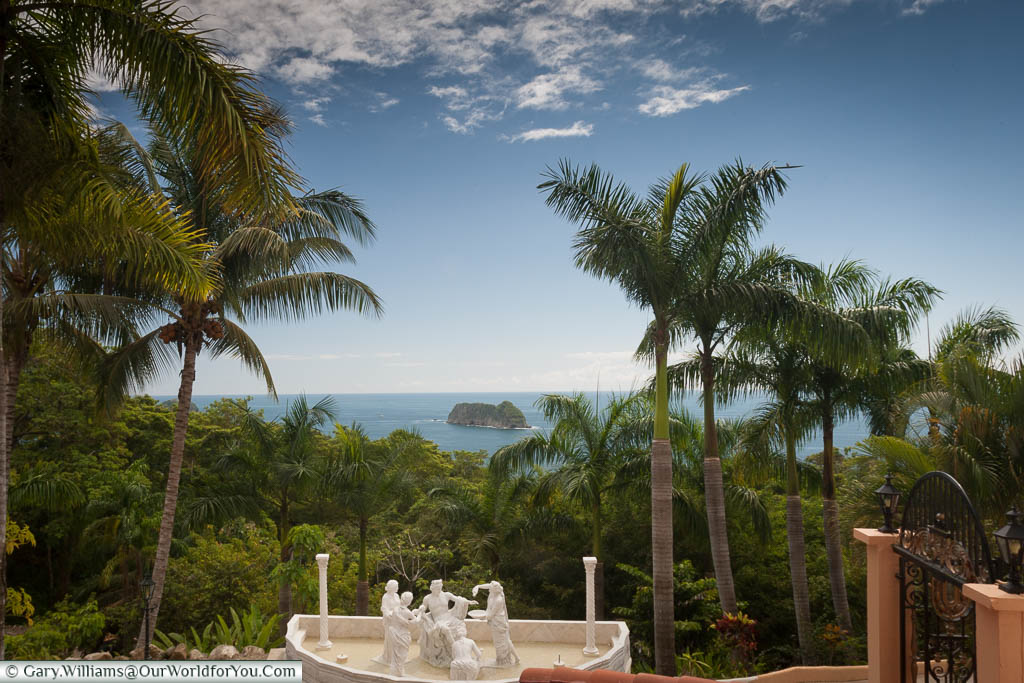 The view from the Hotel Parador lobby, Manuel Antonio

Despite the crocodile the view is amazing; poolside bar too – excellent, Mojitos it is then. 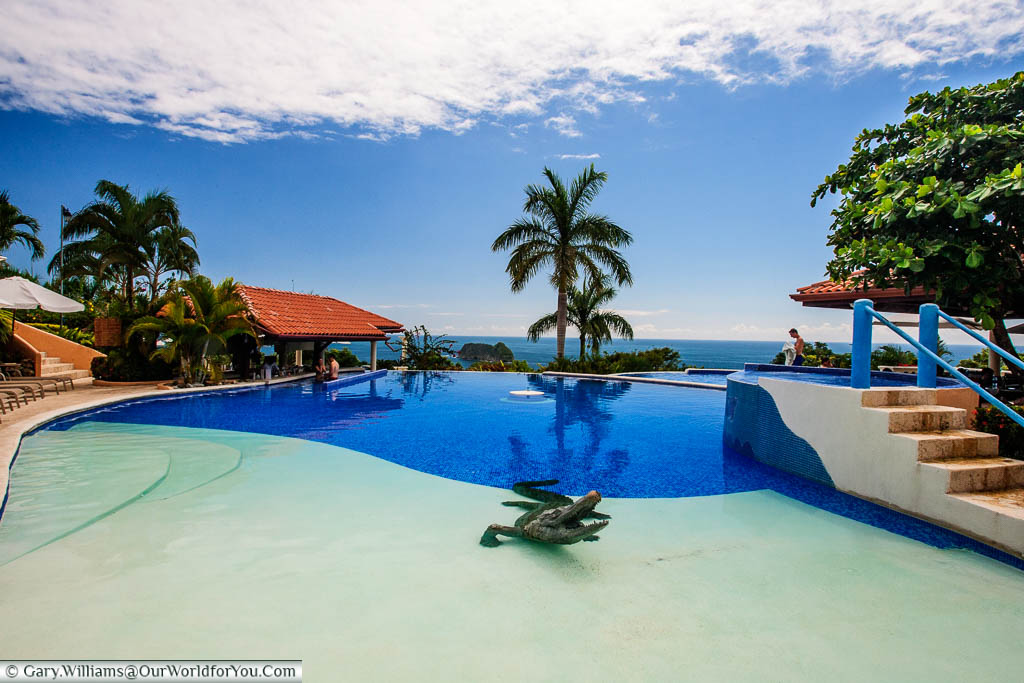 The pool at the Hotel Parador, Manuel Antonio

We hoped of catching a glimpse of the a sloth at some point over the trip. We could not believe our luck on our first day to see this little fella.

Our first Sloth in Costa Rica

Our accommodation was the Hotel El Establo, Monteverde.

After a couple of days at Manuel Antonio our road trip continues to Monteverde with approximately a 5 to 6 hour relaxing drive through wonderful scenery.

Monteverde is well known for its ecotourism & Cloud Forest Reserve.

The next morning we jumped back into the Mitsubishi our 4×4 was an ideal choice for the journey up to the Cloud Forest Reserve. 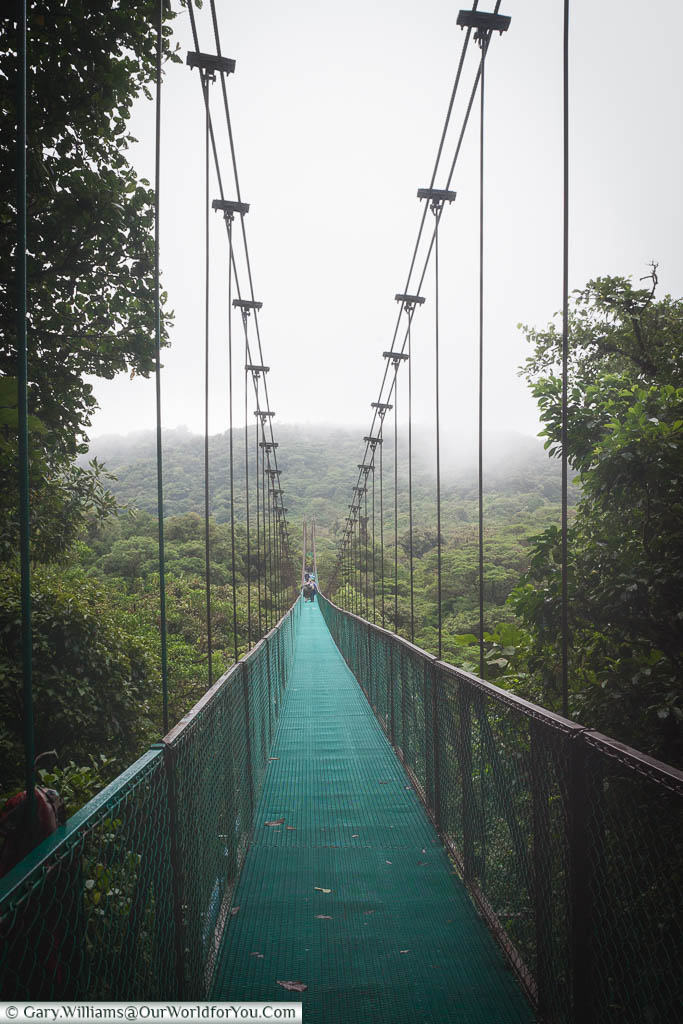 On the way back we decided to take a short cut which at the time seemed a good idea…. now I trust Gary’s driving, but on this occasion the road less travelled was not a good idea. But once we started up this 30-degree narrow ascent there was no turning back, it was not fun.

To avoid the sinkholes and the rocks Gary decided to move the truck to my side of the road, but the 3-foot gully was not too welcoming. I shut my eyes and hoped for the best, Gary shifted to the lowest gear possible and crept up the rest of the road at a crawl, trying avoid the largest obstacles where possible.

The ironic thing was the road wasn’t that long, but until will got up the top of what seemed like a vertical climb we weren’t to know.  My relief was difficult to hide, but no doubt the surge of profanities aimed at Gary let him know. 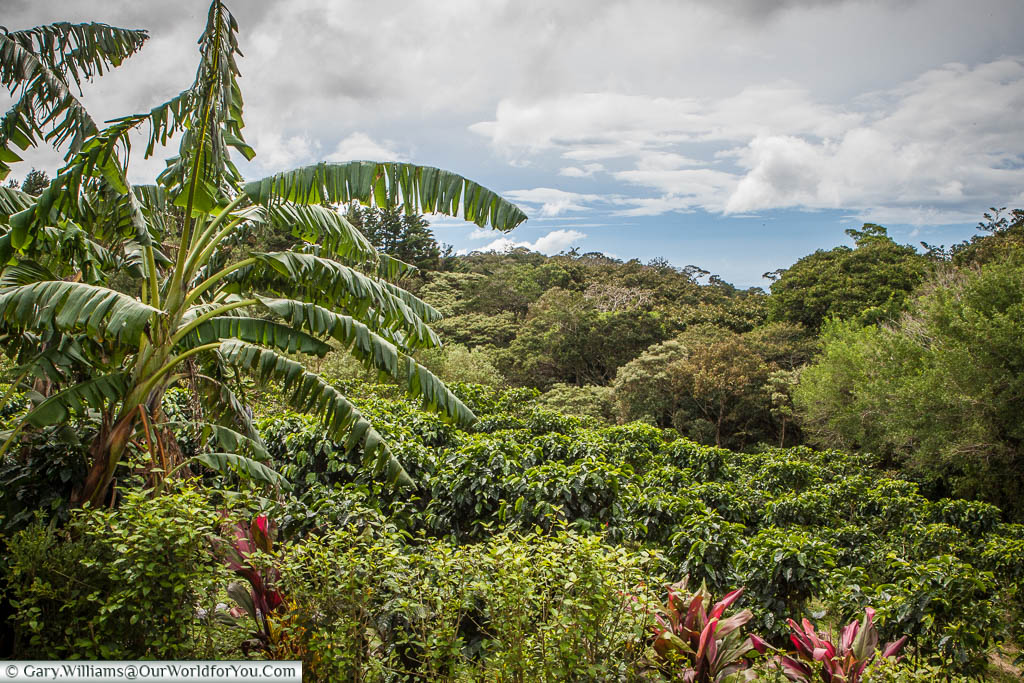 Don't just take our word for it!

If you're tempted by the enchanting rainforests full of incredible wildlife or the golden sandy beaches, take a look at the 'Visit Costa Rica' official website. The local Ticos know what they are talking about.

Our accommodation was the Lost Iguana Resort, with the stunning back drop of Arenal Volcano. 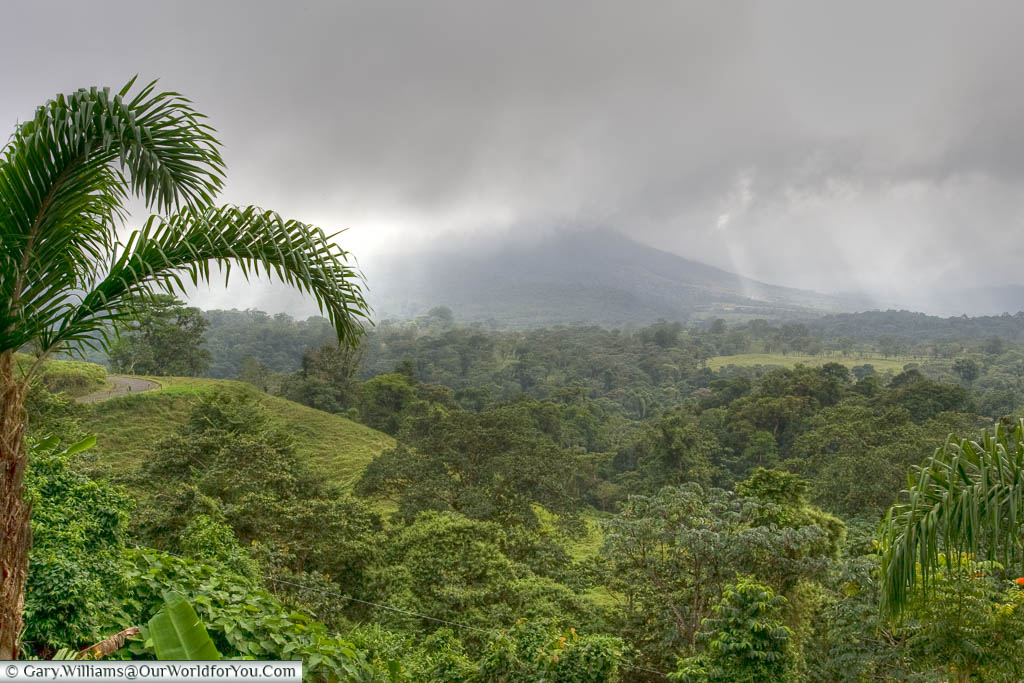 Monteverde to Arenal. Home of one of Costa Rica’s many volcanoes, which is still active and last erupted in 2010.

Then came the part of the road trip whereby we were glad we listened to the guy giving us advice on the Costa Rican Highway Code. It was explained to us that there may be a chance that we would get pulled over by the police for speeding or other traffic misdemeanors. The advice was to pay the fine at the airport on departure.

Well that occasion occurred; on one of the more main roads in Costa Rica we turned a bend and could see police in the distance holding up a mobile speed camera, to our surprise they stopped us. The officer held up the registered speed to us on the camera and explained that we would incur a fine. Based on the advice of the Hire car company, we opted to pay at the airport. Then after some further contemplation between him and his colleague he decided that he would let us off on this occasion and sent us on our way.

We headed back along the same part of the road later in our trip and saw them again talking to another unsuspecting driver. 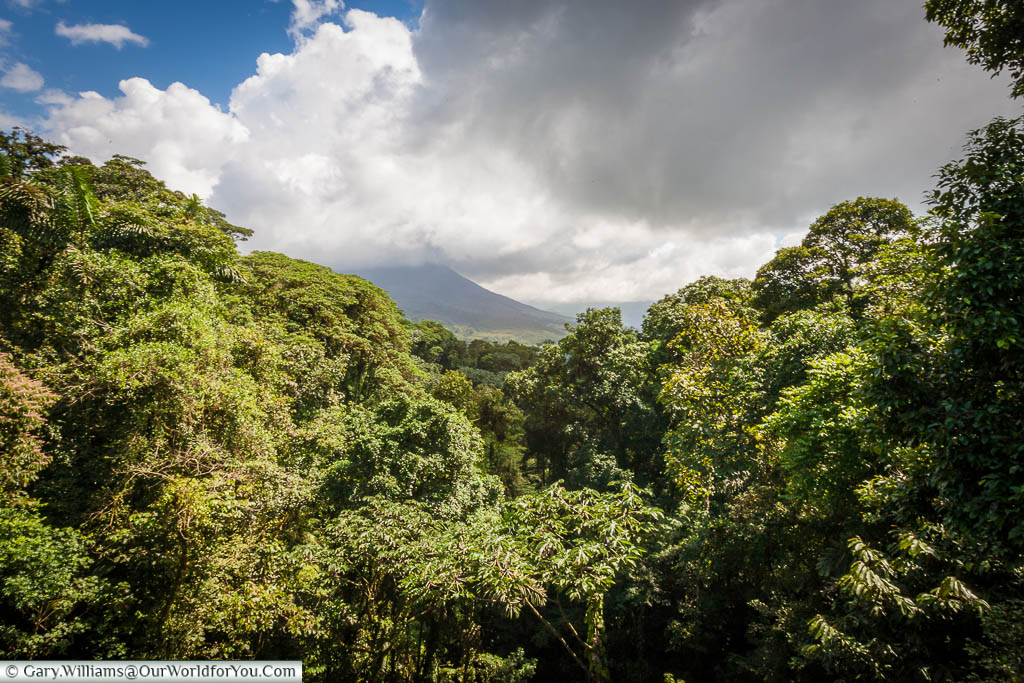 After another picturesque drive across the Costa Rican countryside, we arrive at Arenal.
We spent a large part of the day at the ‘Mistico Arenal Hanging Bridges Park’ 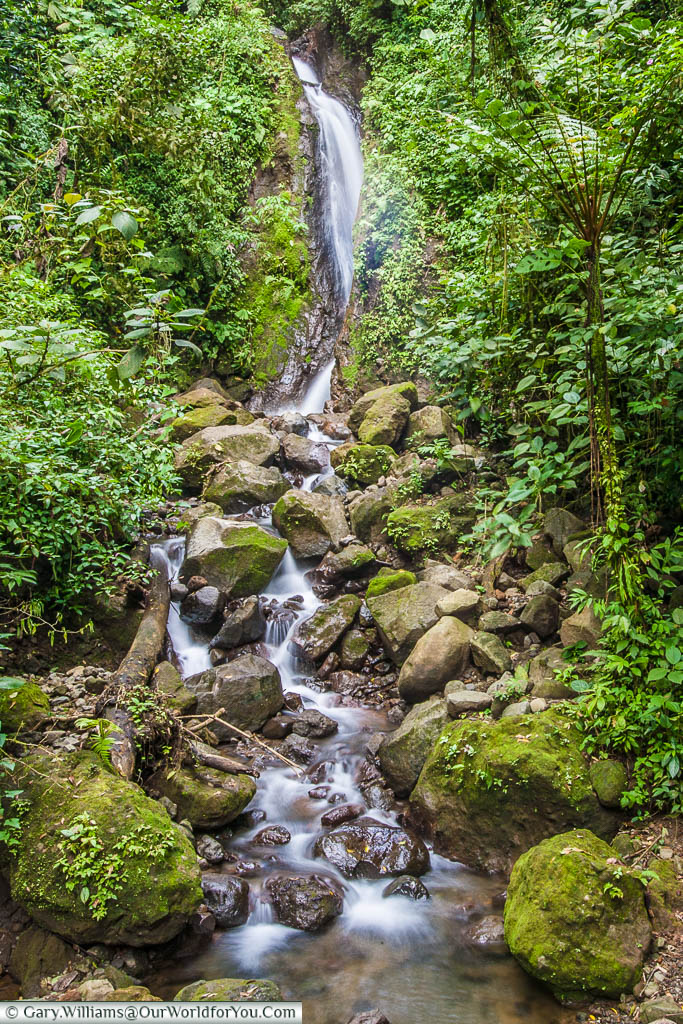 A waterfall in the Mistico Arenal Hanging Bridges Park

The cable line back to the Sky Tram base. Arenal

Today was the last day of the road trip with the Mitsubishi, we had about a 3 hour trip back to San Jose for one night, where the car hire company met us to collect the 4X4.

Embark on your own Costa Rican road trip you'll be amazed how easy it is to tour around by car with. Like us you can create your own road trip and visit Manuel Antonio, Monteverde, Arenal and Tortuguero.

Take a peek at the offers at Rental Cars, they cover all budgets and allow you to pick up and drop off at different destinations.

In San Jose we stay at the Marriott San Jose

The final part of our Costa Rican adventure was to Tortuguero, (on the Caribbean Sea side of the country).

Our accommodation was The Laguna Lodge, Tortuguero

As the hop to Tortuguero is only accessible by boat, the travel company, which assisted us organise the tour (www.latitudesadventure.com), suggested that we complete this part of our road trip as a package. That way all the transfers, food and accommodation were included.

We head off in the coach at 5:45am the next morning and admire all the small towns and villages we pass through along the way. 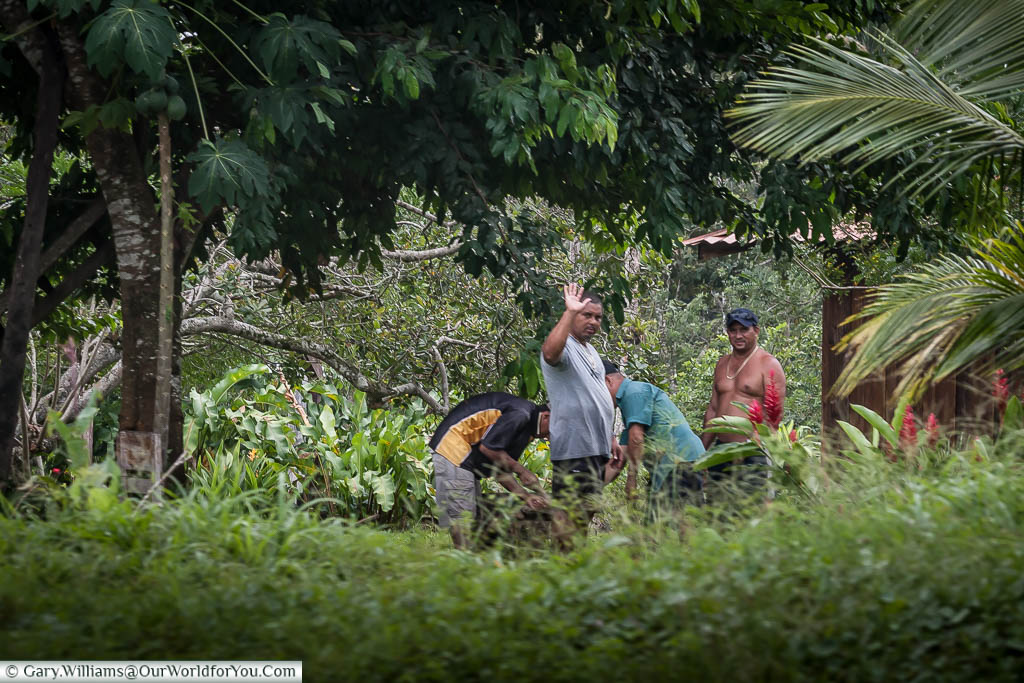 A warm welcome from the Ticos, Tortuguero

The closer we get to Caño Blanco (where we pick the boat up) the more rural the scenery becomes, we travel through banana plantations and what appears to be farmers back yards.

This part of journey could be self driven but you would need to leave your vehicle at Caño Blanco (where you pick the boat up) for the few days that you are in Tortuguero. 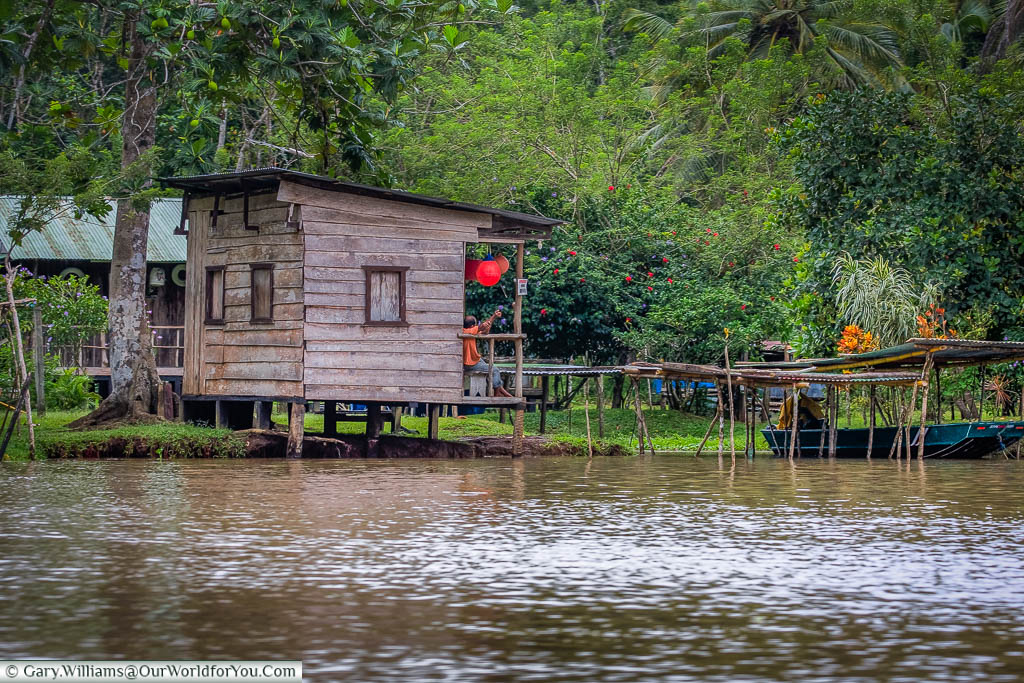 The journey to Tortuguero is fabulous

The Laguna Lodge is situated on a narrow strip of land between the Caribbean Sea and the main Tortuguero lagoon. It is only a short stroll from one side to the other (650 feet).

A family on the water in Tortuguero

We complete the same journey to Tortuguero but in reverse and arrive back at San Jose late afternoon.

The last hotel of our holiday was Hotel Grano de Oro, which was a lovely way to end.

You could easily pop into to San Jose town, but we decided to relax in the hotel for the evening with a couple of mojitos. The restaurant here was set within an open air central courtyard and had a fabulous menu, the food did not disappoint either.
The next day was our voyage home, considering this road trip was organised and booked at short notice, it turned out to be amazing, we couldn’t fault anything. 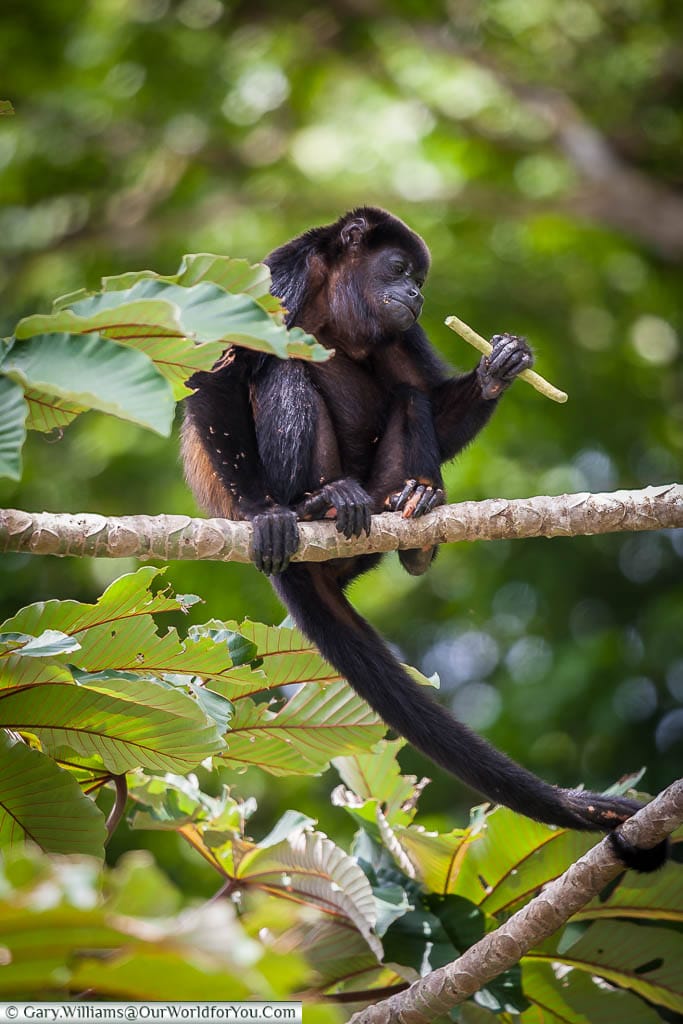 Now that British Airways are flying direct from London (as of January, 2016), who knows we may well go back again.

Ever visited Costa Rica? Felt the 'Pura Vida'? Or are you lucky enough to call a Tico a friend?

Why not use San José as you base to explore this amazingly diverse country.

Then you can choose the Pacific or the Caribbean side, or both.