The moment we arrived in Zadar; I knew we were going to love it.

Gary and I were on a road trip from the UK, and our first stop on entering Croatia was inland. To visit the beautiful UNESCO World Heritage site of Plitvice Lakes National Park.

The small picturesque port of Fosa

However, our next location was to the Dalmatian coastal city of Zadar. The relaxing drive along the shoreline hopping across islands, with spectacular views of the Adriatic Sea was idyllic, a memory that will always remain with me.

When we pulled up in the ancient city of Zadar, we couldn’t wait to jump out and explore.

Our accommodation, while we were in Zadar, was at “Apartment Mahagony Deluxe”. Its location for us was fantastic, just out of the old town and a 5-minute walk to the pedestrian bridge. The apartment was very well equipped and also had parking in a secure underground car park.   Personally, if I were staying for longer in the region, I would use this location as a base for exploring, as not only have you got Zadar on your doorstep, you also have the option of self-catering.
Booking.com
For more information, why not check out Zadar’s local tourist board website. 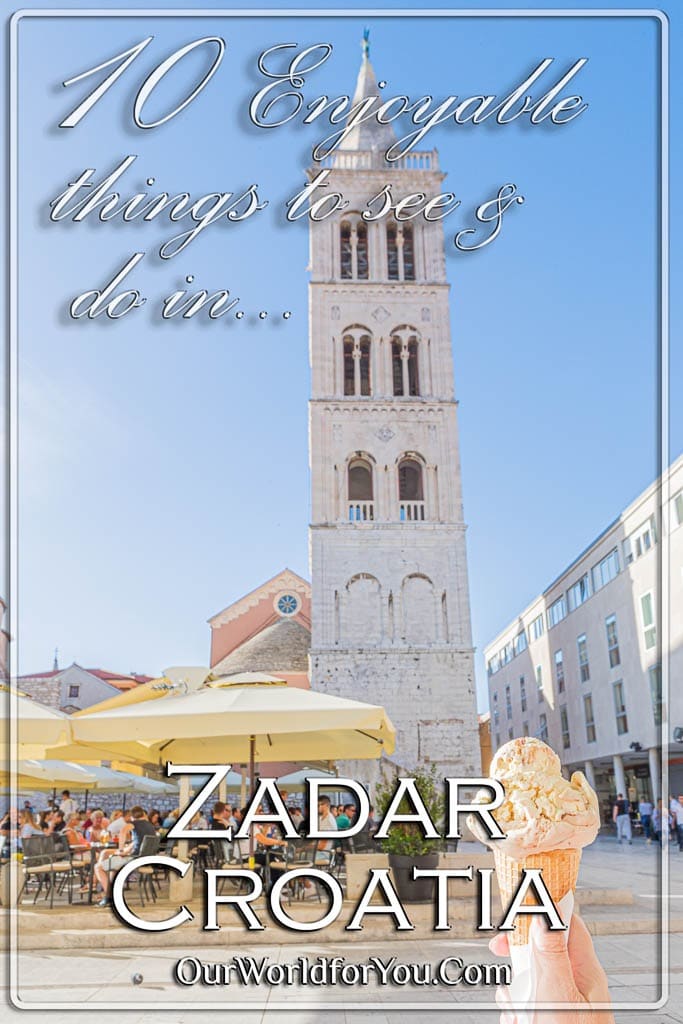 We strolled through one of the old city gates which formed part of the historic walls and ramparts, to a mystical little city beyond. Here’s what we unearthed.

If you've yet to discover the delights of Croatia you're in for a treat. While planning our road trip, I used the DK Eyewitness books.  I find them extremely informative, easy to follow and the pictures and maps tempt you into discovering more.

We used a previous version of this book to plan our north to south Croatian road trip, now you can grab the revised copy.

St Donatus Church was built during the Middle Ages during the 9th-century. The Roman Catholic church is located at the corner of the Roman Forum, with delightful views of the Adriatic Sea and enchanting islands beyond.

The unique round shape of the church is quite distinctive, and one of the reasons I wanted to head inside. With very few windows, it was quite surprising how light it was inside, and I loved its simple architecture. 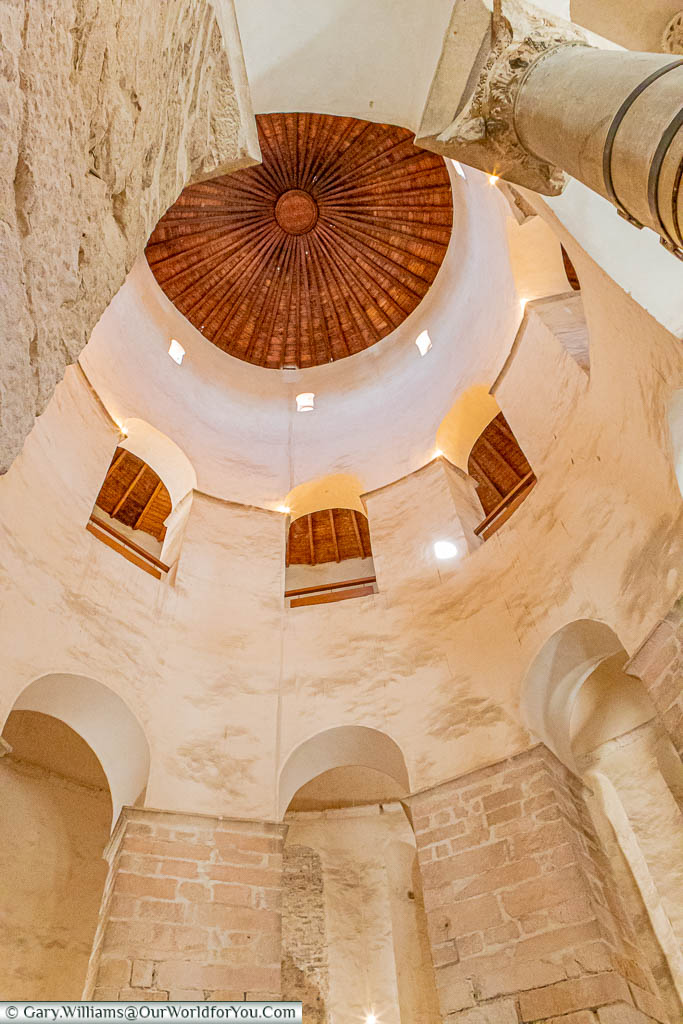 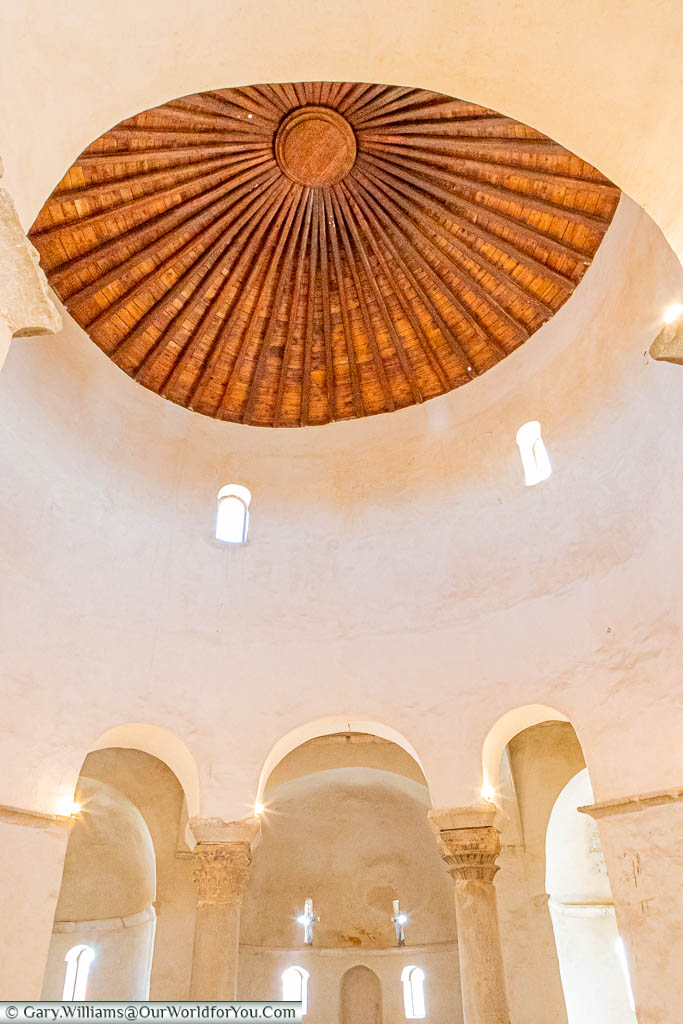 The interior of St Donatus Church

St Donatus is no longer a place of worship, nonetheless, due to its amazing acoustics, it is used for musical performances.

Whether they are the modern marinas or the characterful old harbour of Foša, they are all a delight to stroll around. Watching the little boats bobbing up and down and spotting natures marine inhabitants weaving their way amongst the colourful hulls. 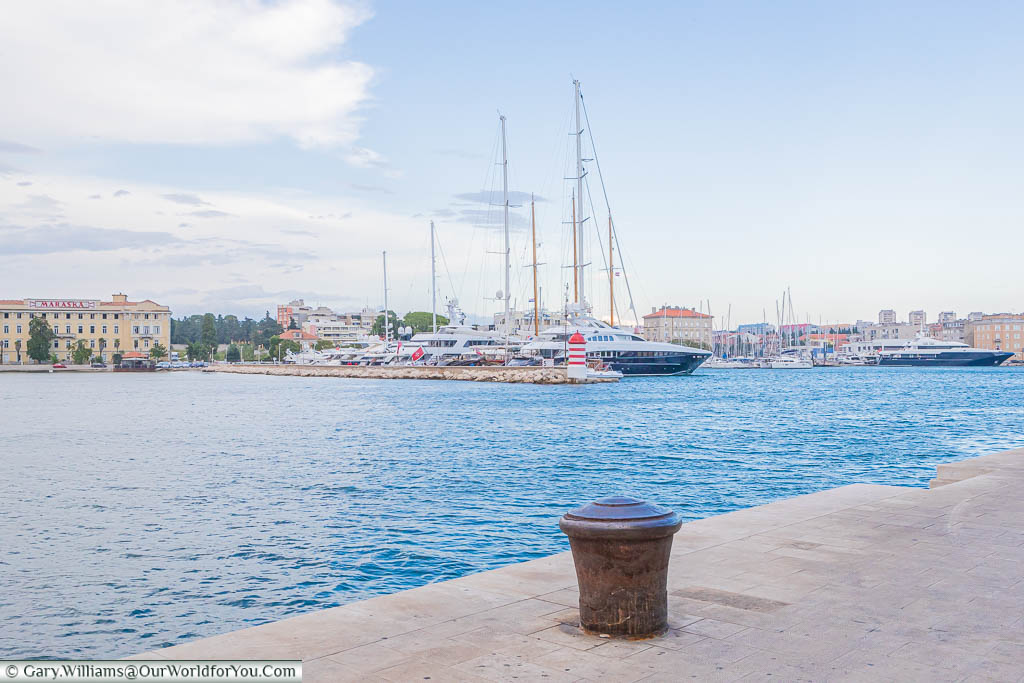 Marina by the ancient city of Zadar

Foša harbour is just on the outside of the ancient walls by the ‘Land Gate’ entrance to the city. I loved it around here, and if you head up to the Queen Jelena Madijevka Park, you get a magnificent view across the harbour and the Adriatic beyond.

Foša harbour by the Land Gate in Zadar

The Romans played a significant role in Croatia’s history and particularly in Zadar. The Forum complex was built from the 1st century BC to the 3rd century AD and founded by the first Roman Emperor Augustus.

During this era, Zadar became a fortified city and was encircled by walls, gates and towers.

Parts of the forum outline and structure still remain, the complex was erected over 45 by 90 metres and would have had prime position overlooking the Adriatic Sea.

In the far corner, the Monumental column is preserved and known as the ‘Pillar of Shame’.

Roman ‘Pillar of Shame’ in the Roman Forum

If you’re touring Croatia on a road trip, take a look at our post on the UNESCO sites in Croatia. All of them are incredible, I really don’t think I could choose a favourite.

4 Strolling the Riva day and night

One of my favourite aspects, when we visited Zadar, was promenading along the Riva. Don’t get me wrong, I love the history of this beautiful city; however, strolling by the Adriatic Sea with a warm breeze blowing through your hair, it was heaven. 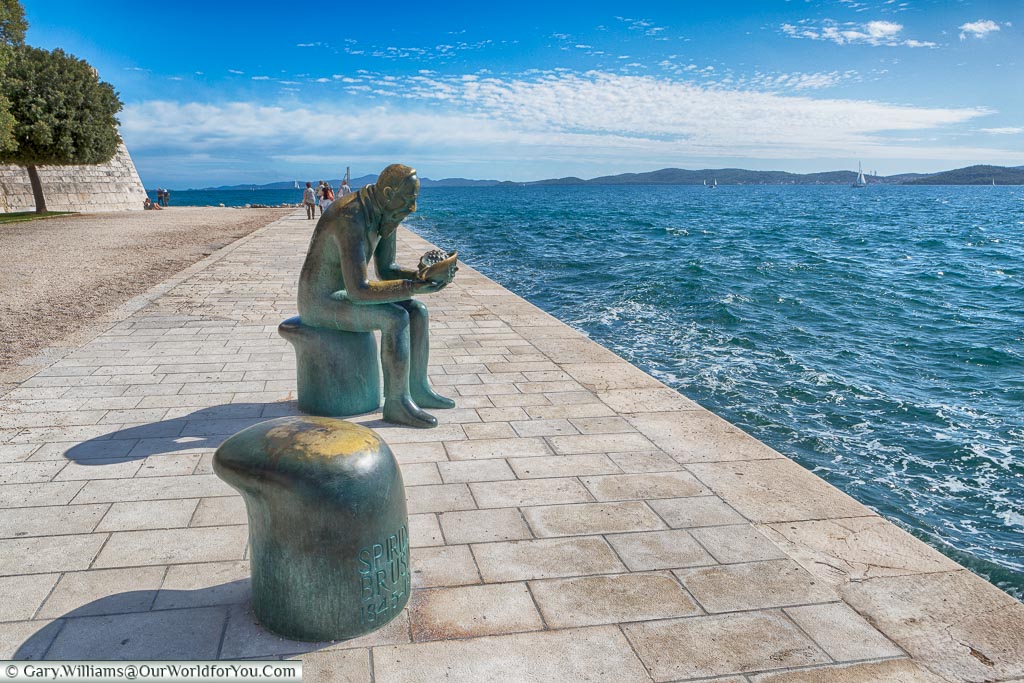 Whether it’s during the morning sunrise or a balmy evening settling in for the night, it holds such warming memories. For those that know me, I never like being too far from water.

Keeping with the nautical theme stroll along to the other end of Zadar’s Riva to the Sea Organ. This is a wonderful place to sit and watch the world meander by while listening to the dulcet tones of the Sea Organ beneath you. 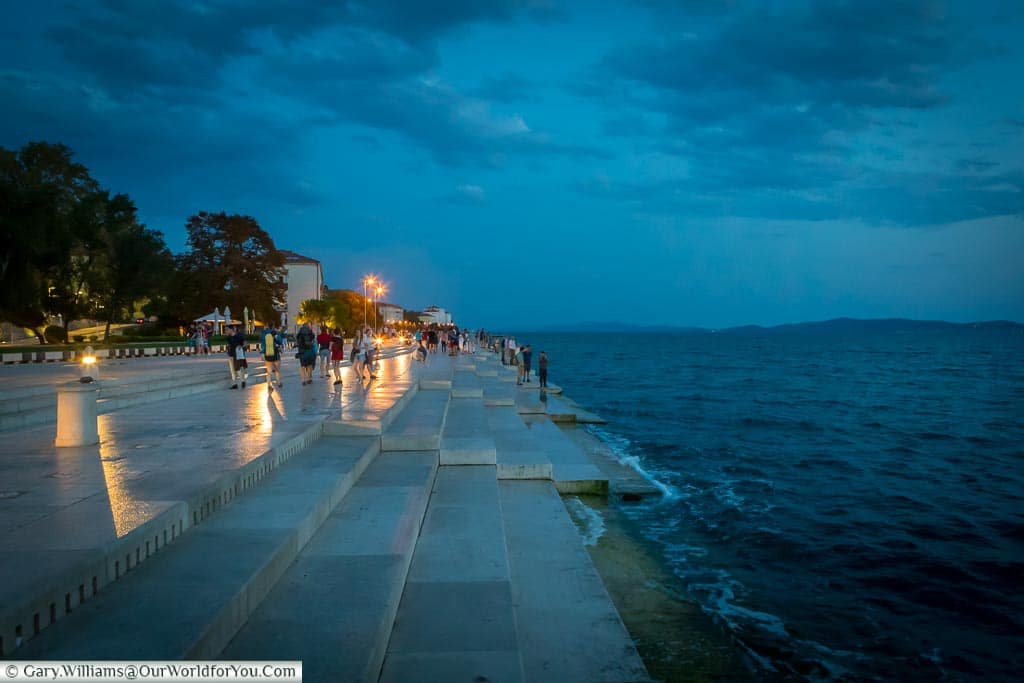 The Sea Organ, hidden under Zadar’s Riva at dusk

The Sea Organ is located under the marble steps that lead down into the sea. The continually rolling seawater lashes under the steps to where pipes of different lengths and tone are located. As the water bounces on the pipes, a delightful reverberating sound echoes from them day and night.

Start creating your own road trip adventure to Zadar for yourself, by flying directly into Split. Zadar is around 100 miles (160km) north of Split. Take a peek at the offers at Rental Cars, they cover all budgets and allow you to pick up and drop off at different destinations.

6 The Greeting to the Sun

Just a few steps from the Sea Organ is the enchanting sunken light display ‘The Greeting to the Sun’. It’s such a fantastic piece of public art for everyone to enjoy, located on the far end of the peninsular with breath-taking views all around you.

‘Greeting to the Sun’ light display at Zadar’s Riva

Within the 22-metre diameter circle, there are three hundred multi-layered glass plates. When the sun starts to set the mesmerising light show kicks into action, and it just makes you smile.

It so pleasant around this part of the city, you won’t want to leave, so grab a cold beer and sit back and enjoy.

I was aware of the historical period that the Venetian Empire played in Croatia’s past.

However, I was still surprised to see how much of this remained. The stunning Venetian architecture so synonymous with the beautiful Italian city can be seen through Zadar and other parts of Croatia, particularly in the north.

The striking tall towers stand so elegantly in the squares and then with the delicious Italian cuisine influences in the local food, you’d be forgiven if you were transported to St Mark’s Square. 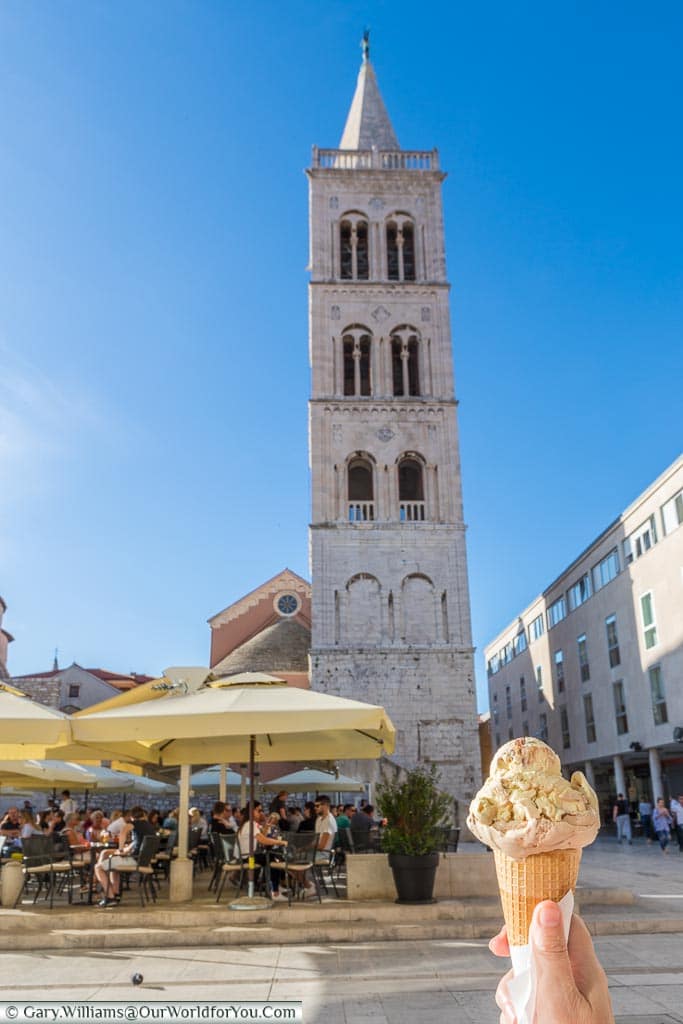 Enjoying a gelato by a Venetian Bell Tower in Zadar

Discover more of Croatia on a road trip, you'll be amazed how easy it is to tour around by car. Like us you can create your own adventure, take a look at our ‘8 Places to visit in Croatia’, to see how easy it is.

Zadar’s Old Town is a stunning part of the city to stroll around day and night, it’s full of such a joyful vibe.

Enticing café’s and tiny intriguing lanes, to jaw-dropping vistas and centuries of absorbing history. Around every corner, there’s a story to be had, if only these walls could speak. 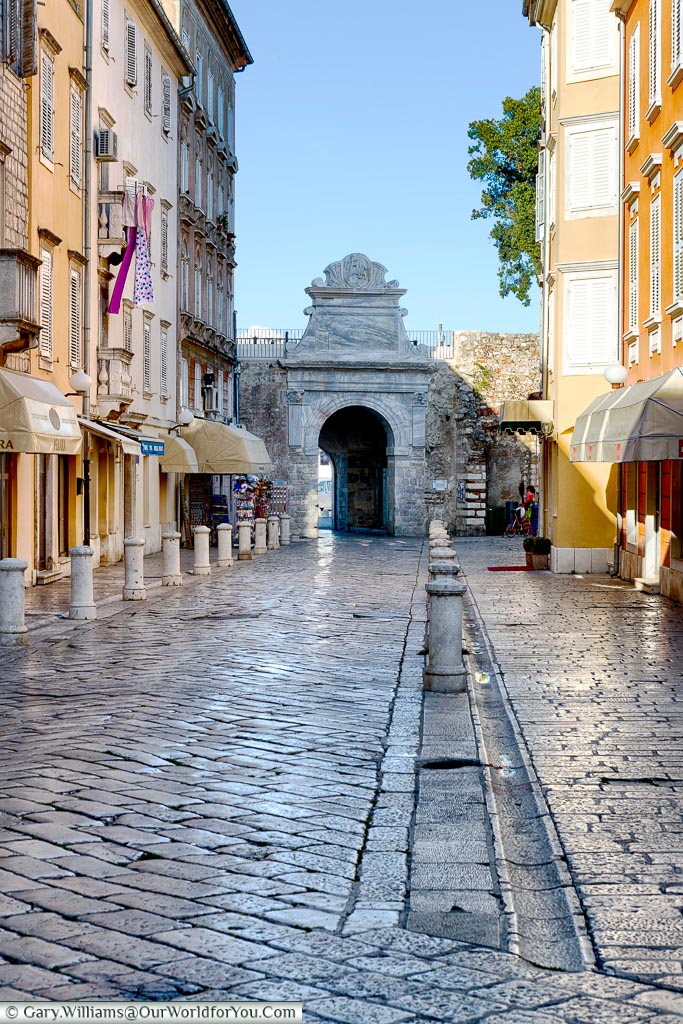 Towards the Sea Gate

Often with old towns around the world, tiny cobblestones line the streets, here in Zadar and through so much of Croatia the lanes are laid with pale cream formal shaped stones. Which, over the centuries of footsteps have been buffed and rounded.

Why not make a day of it?

If you’re based in Zadar, and fancy discovering the opal lakes and waterfalls of Plitvice Lakes National Park, jump on this full-day tour.

You’ll be picked up from Zadar and whisked off to this magnificent UNESCO natural wonder.

Dotted all around Zadar are delightful squares, some with fountains, some are brimming with cafés and restaurants, and others are just a peaceful place to relax and let life carry on around you.

People’ Square in the Old Town

People’s Square in the heart of the Old Town, which is surrounded by historic buildings was bustling morning through to evening. We strolled through late one night after our evening meal and live music was playing, and people young and old were dancing the night away. 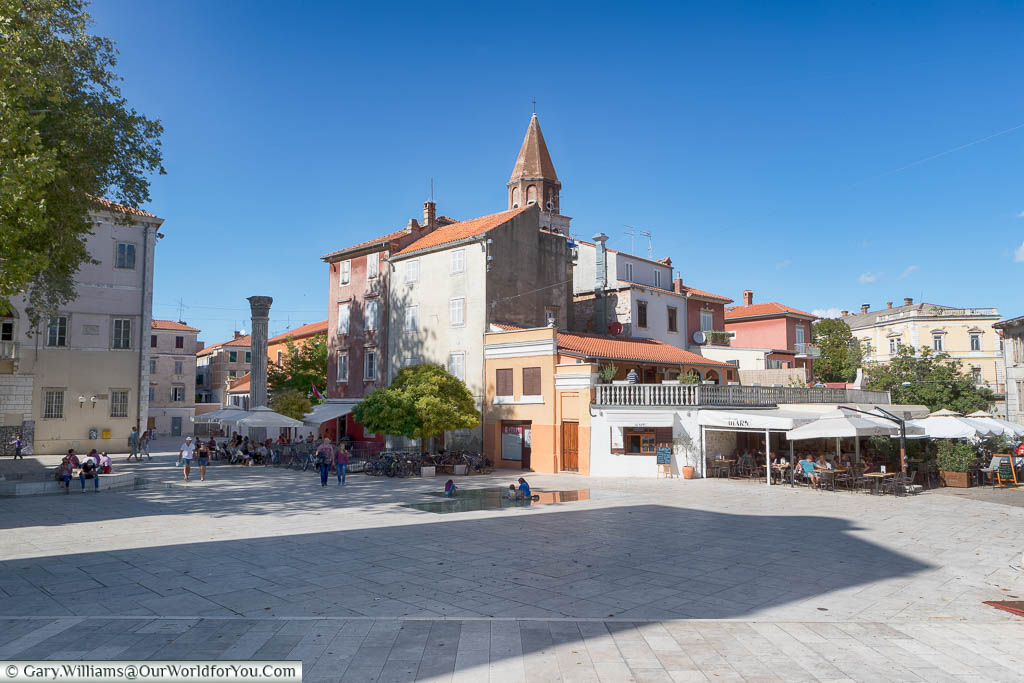 The square I enjoyed heading to was Trg Petra Zoranića, near the ‘Five Wells’. The square had a lovely Venetian feel about it, central fountain, ancient column and a warm, friendly atmosphere.

For more information, why not check out Zadar’s local tourist board website.

We were only in Zadar for a couple of evenings; however, we stumbled upon some charming restaurants with incredible food. As you can imagine with Zadar’s wonderful location on the coastline of the Adriatic Sea, it has an abundance of fish and seafood. 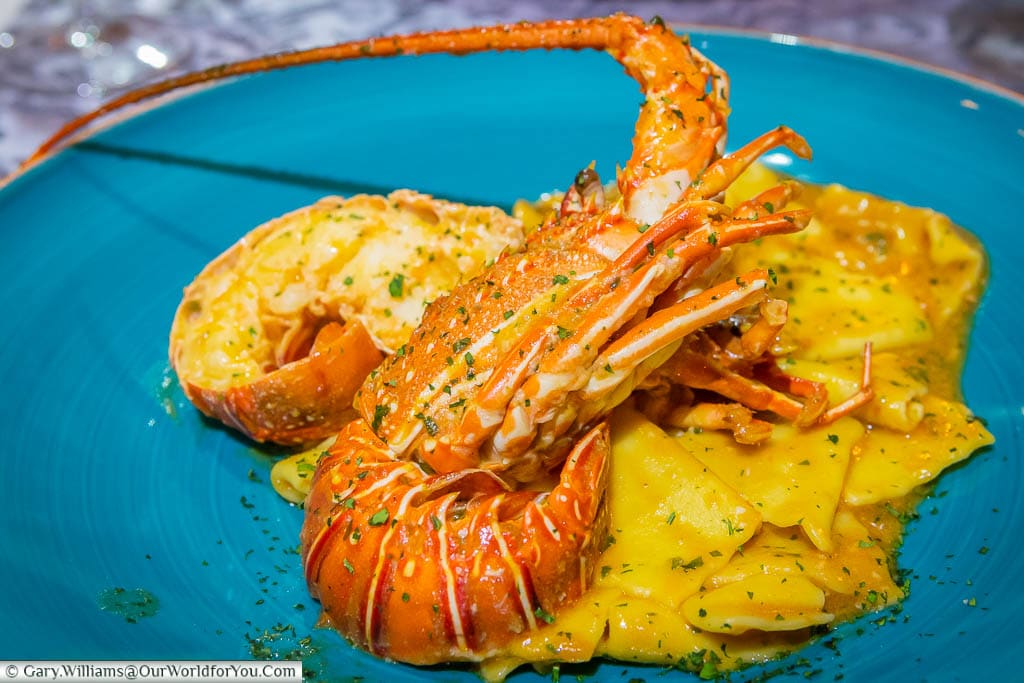 We weren’t going to turn down the opportunity of sampling the local freshly caught delights. So, during our visit, we chose langoustine pasta, seared tuna, cuttlefish risotto, mixed fish skewers with a side order of Blitva s krumpirom (potato, chard, olive oil and garlic). 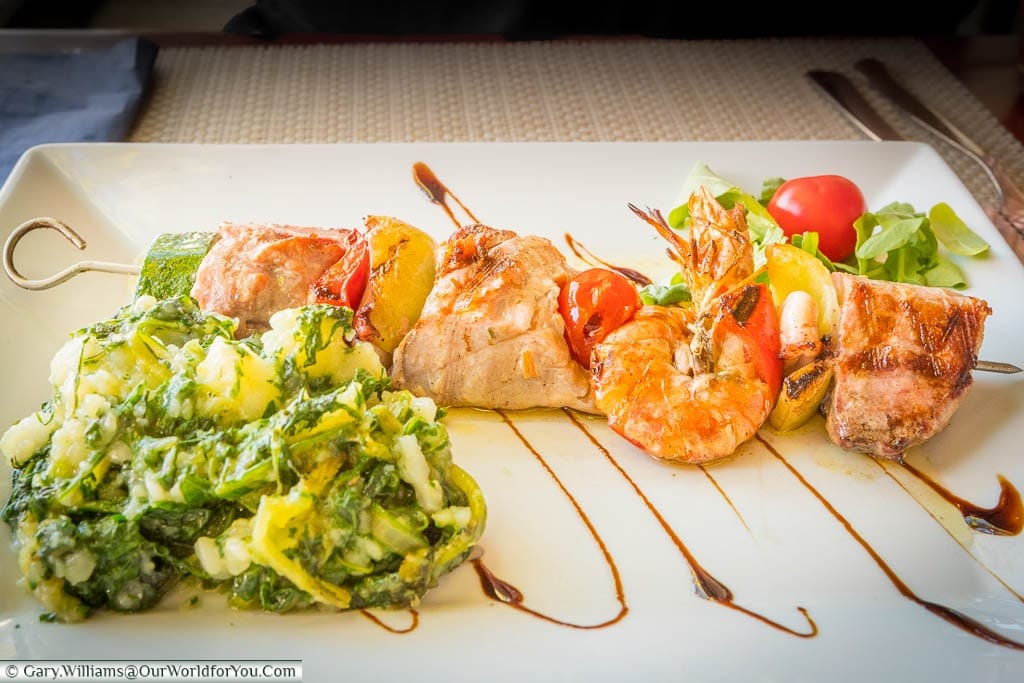 Pack your bag and start planning, there is so much to see in this ancient city.
Booking.com