The Norman’s left their mark

As part of our ‘Norfolk’ road trip, we based ourselves for a couple of nights in Norwich, an incredibly historic English city, right in the heart of East Anglia. In 2012 Norwich became England's first UNESCO City of Literature.

For our time in Norwich we stayed at the Maids Head Hotel which offered, comforable rooms, fine dining, a quiet bar and ample offstreet parking. We'd recommend it.

This is the accordion body content. It is typically best to keep this area short and to the point so it isn't too overwhelming.
If you're tempted by the beautiful English county of Norfolk and its incredible far reaching coastline take a look at the 'Visit Norfolk' official website. 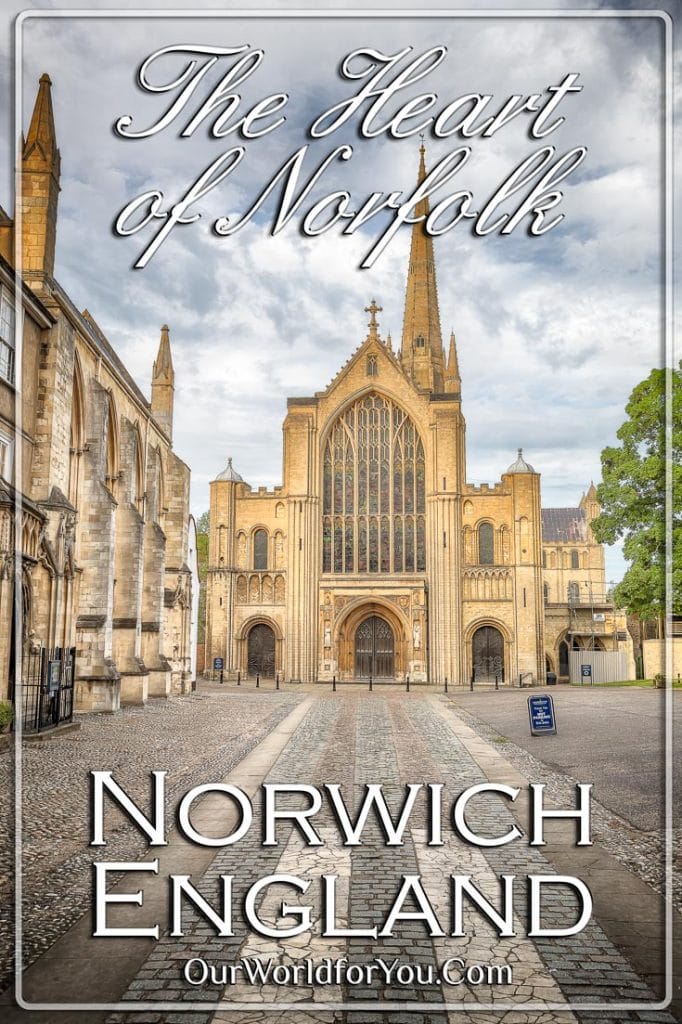 Although for us this was a road trip, Norwich is only a couple of hours by train from London’s Liverpool Street Station, so easily accessible from the country’s capital.

Standing for over 900 years

Very few buildings could boast this accolade; however, Norwich Cathedral has stood for over 900 years, and the impressive Norman Tower still remains today.

Norwich Cathedral is beautiful inside and out, and whatever religious persuasion you are it is a delightful place to visit.

Through Erpingham Gate to the Cathedral

Once you’ve strolled throughout the Cathedral, I highly recommend that you head outside. The enchanting cloisters are incredible and they the second largest in England after Salisbury Cathedral.

Amazingly, Norwich Cathedral is free of charge to visit, along with its guided tours.

One of Norfolk’s most famous daughters is the nurse, Edith Cavell, who was executed behind enemy lines for nursing and sheltering Allied forces.

Edith Cavell never discriminated between nationalities and she helped all that were in need regardless of which side of the war they were fighting on.

Edith was given a state funeral in 1919 at Westminster Abbey and now rests in “Life’s Green” at Norwich Cathedral.

The memorial to Edith Cavell

If you're intrigued by Norfolk, a UK county with an interesting past, then wy not check out  "The Little Book of Norfolk".  Full of facts and obscure information. It's a fun read on the region.

You can pick it up for your Kindle or in good old hardcover. (Depending on region)

Erpingham and Ethelbert gates lead you into the Cathedral and its enchanting 44-acre surrounding Close.

It is so serene & peaceful, wandering around the beautiful grounds day or night you feel like you have stepped back into a slice of idyllic English life, with its cobbled streets and manicured lawns and gardens.

Grab a picnic and admire the many listed buildings within The Close, then take a stroll down to the Pulls Ferry & the riverside walk.

Not to be outshone

Another iconic sight in Norwich is its castle, built by the Normans for William the Conqueror as a royal palace

Originally taking the form of a motte and bailey, the castle is now home to a museum and art gallery, with fantastic views across the city.

Another area of Norwich that we loved was the labyrinth of cobbled lanes and medieval Tudor buildings in the Cathedral Quarter along Elm Hill & Tombland.

A view of Elm Hill in Tombland

One of the most eye-catching buildings in the centre of Norwich is the wonderful Art Nouveau Royal Arcade, designed by George Skipper.

Inside the Royal Arcade

The entrance to the Royal Arcade

His work also includes Surrey House the headquarters of Norwich Union; and the Hotel de Paris in the delightful nearby seaside town of Cromer.

Norwich has the largest six-day open air market in the country, housing up to 200 stalls. Historically a market has been held here since the 11th century, and it is looked down upon by the Art Deco City Hall.

If you get a chance to stroll along the River Wensum by Pulls Ferry, you’ll be rewarded with a lovely view back to Norwich Cathedral.

A view of Norwich Cathedral

Also along the walk, you’ll find the Cow Tower, an artillery tower built between 1398-1399.

The tower was built to defend the north-eastern approach to Norwich from the French.

Norwich is not only full of historical architecture it has had some notable residents as well, one of which was Horatio Nelson, who attended grammar school here.

A statue of Nelson

So many churches & barbers

What we noticed about Norwich was that there so many churches (along with two cathedrals). I have since discovered that no other county in Britain is richer in its historic churches than Norfolk - there are over 650 of them.

For some reason, Norwich also has a lot of old style barbers….who knew?

Our choice of hotel while we were in Norwich, was the historic Maids Head Hotel, fantastic location only a few steps from Erpingham Gate and the Cathedral. Also, it had free onsite parking.

If you enjoy a steak, this is the place to go, the Prime Restaurant located in Tombland. You cook your own steak on a piece of volcanic rock.

It's worth booking with Prime Restaurant in advance.  We walked in on a Monday evening, and we were lucky.

We also opted for the Tasting menu at the Wine Press - The restaurant within the Maids Head Hotel.

Each of the 5 courses were served with a matched wine. In all, an enjoyable experience.

With the tasting menu at the Wine Press you need to book in advance.

Where we had, a pit stop

Just for research purposes (honest…), we stopped at the Adam & Eve, Norwich’s oldest pub established in 1249.

We have created a little YouTube video of Norwich. Just a 3 minute snippet of this great city.

Visited Norwich? Were you impressed by the city's architecture? - Gary was. A charming place that is really worth a visit.

It has become a favourite city of ours. A city full of history & culture, but one that still looks forward.

Why not check out the latest deals on Booking.Com?