So this post is our light-hearted view of Rome in Italy.

It has some of the interesting stuff, a few trivial facts, and our thoughts on this spectacular Eternal City in Lazio. 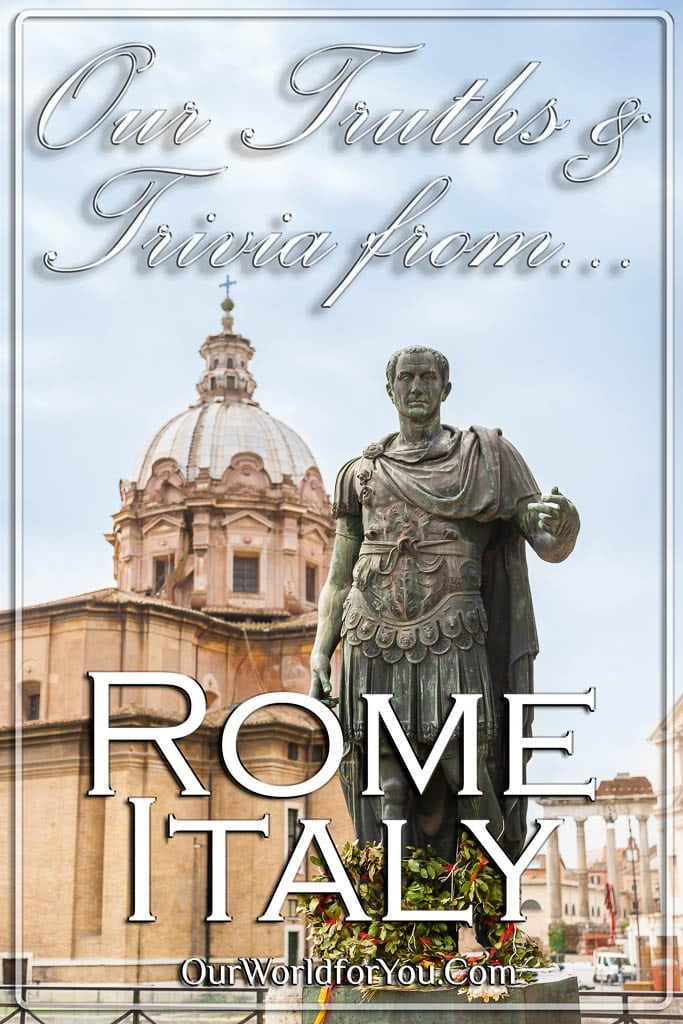 Let’s start with the Truths about Rome

Rome is the enchanting capital city of Italy, located in the Lazio region and nestled along the River Tiber banks.

The breath-taking city of Rome is overflowing with so much ancient history that every tiny piazza or snaking alleyway will keep those inquisitive internal flames smouldering.

Rome was founded around 753BC, and its first king was King Romulus, who reigned from 753BC to 716BC.

The elegant and striking style of Baroque was born in Rome in the early 17th-century. Beautiful examples of Baroque architecture can be seen throughout the city, particularly the Trevi Fountain.

Prior to Rome becoming Italy’s capital city in 1871, this honour was briefly held by Florence.

Italy was ruled under the fascist regime of Benito Mussolini from the ‘March on Rome’ on 31st October 1922 until his arrest on 25th July 1943.

Vatican City, the city within a city, became independent from Italy in 1929 and is the smallest country in the world. In 1984 Vatican City became a UNESCO World Heritage Site.

The Historic Centre of Rome was granted UNESCO World Heritage status in 1980.

Rome is home to the renowned film studio Cinecittà Studios. It can boast of being the largest film studio in Europe. It was founded in 1937 and has been used for so many well-known productions, such as Ben-Hur, Roman Holiday, The English Patient and Gangs of New York.

Where's Rome in the world?

Rome is the perfect location for a mini-break. When I was growing up, Rome had always been at the top of my wish list. It was the first European city outside of the UK that Gary and I visited.

Rome is relatively flat, which makes it easily negotiated on foot. In my opinion, strolling around is always the ideal way to discover a city - especially one like Rome that has so many hidden piazzas and ancient lanes to unearth. 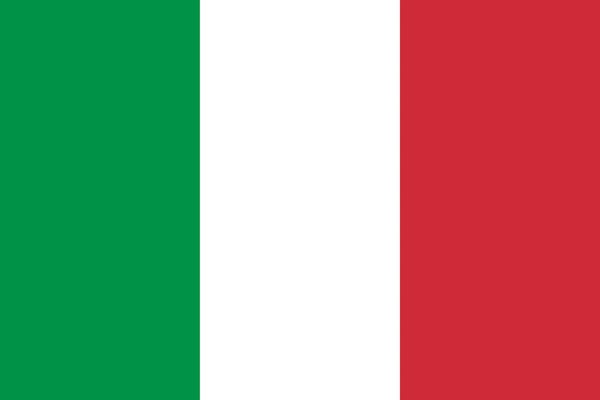 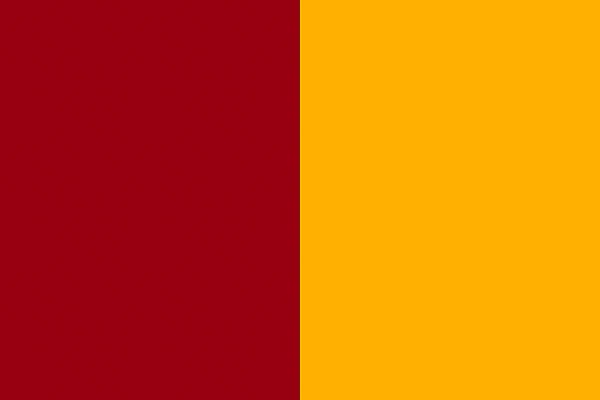 Regarding Rome, with its dolce vita lifestyle and home of sword-wielding gladiators.

Pecorino Romano
Pecorino is a lovely alternative to the delectable Parmigiano Reggiano. This hard, aged sheep’s cheese is slightly saltier and is a tasty accompaniment to Italy’s delicious pasta dishes.
Carbonara
Prior to visiting Rome, I didn’t realise that carbonara was a Roman dish. It makes it more satisfying to eat when you know it’s the local cuisine. It is primarily made with eggs, hard cheese, cured pork, and a few twists of black pepper; it’s reasonably straightforward to re-create at home.
Gelato
Oh, go on then, let’s talk about ‘ice-cream’. There are so many tempting ice-cream parlours throughout Rome, I’m certainly not complaining, I actually enjoy the traditional flavours, what’s your favourite?
Frascati
It’s always good to find a local tipple; Frascati DOC is produced in the city of Frascati, just 15miles (25km) southeast of Rome. It’s a light, slightly effervescent white wine and ideally enjoyed in the sunshine overlooking a beautiful piazza.

Colosseum
There’s just no way you can visit Rome and not head to the Colosseum; it’s a sight to behold. This spectacular amphitheatre has been welcoming visitors since 80AD.
Roman Forum
Strolling amongst the ancient ruins of the Forum, you gain an understanding of how the Romans once lived. The network of lanes crisscrossing between the grandeur of the now crumbling temples.
Trevi Fountain
This stunning Baroque fountain was built in 1762 and is still as magnificent today as it must have been over 250 years ago. Don’t forget to throw a coin, then one day, you will return.
Pantheon
This former Roman Temple is beautiful. Its is located in Piazza della Rotonda and is believed to have been built around 126AD.   The granite Corinthian pillars guide you into the stunning interior and the incredible dome unfolding high above.
Spanish Steps
Another wonderful piece of architecture not to be missed in Rome, the Spanish Steps. Start from the bottom at Piazza di Spagna for the lovely view of the Trinità dei Monti church above.  Then climb the 135 Spanish Steps from Piazza di Spagna to see the wonderful view across the Eternal City.
The Capitoline Museums
They first opened to the public in 1734 and are a beautiful group of museums within a museum.  The Capitoline Museums hold some of Italy’s most precious artefacts.
Vatican City
The Vatican is within its own little city, here you can visit St Peter’s Basilica, St Peter’s Square, the Vatican museum and of course, the exquisite Sistine Chapel.
St Peter’s Basilica
Within the Papal enclave, overlooks the elegant St Peter’s Square. It’s from here that the Pope presides over his congregation.
The Sistine Chapel
There may be a bit of a queue to get there; however, the gorgeous sight of Michelangelo’s Renaissance works in the chapel are worth every minute.
Don’t forget to have a peek at our post 10 Reasons to Unearth Rome.

If you've yet to discover the incredible history and architecture in Rome, you're in for a treat. I found this DK Top 10 Pocket Travel Guide invaluable, they're extremely informative, easy to follow and the pictures and maps tempt you into discovering more of those tranquil courtyards.

We used a previous version of this book to plan our Rome adventure, now you can grab the revised copy.

Spectre
Yes of course, it’s Bond, James Bond. Who can forget the car chase through the narrow streets of Rome and the banks of the Tiber, not me? 007 is on the trail of Blofeld to uncover the secrets of SPECTRE, full of action and highly entertaining.
Angels & Demons
The 2009 Ron Howard movie starring Tom Hanks as Robert Langdon. This time he is uncovering a secret brotherhood around Vatican City. The hidden 13th-century passageway of ‘Passetto di Borgo’ was used during filming. It connects Vatican City with Castel Sant’Angelo.
Three Coins in a Fountain
The 1954 classic movie of three American flatmates hoping to find love in the city of romance. Do they, don’t they? Let’s throw a coin anyway.
Roman Holiday
Ahh, yes, another 1950s classic movie starring Audrey Hepburn and Gregory Peck. Princess Ann has managed to cut loose from her guardians and is longing to discover love within the enchanting streets of Rome.
Assassin’s Creed: Brotherhood
One for gamers. Set within 16th-century Rome, this high action-adventure game sees Assassins and Knights Templars fight against each other. Battling and leaping across the rooftops and ancient architecture of Rome.

-As a little bit of indulgence, we stayed at the luxury hotel Albergo del Senato in the beating heart of Rome. Just throw open your balcony windows, and the magnificent Pantheon will be there to greet you.

And our thoughts on Rome

After all, Rome is Italy’s capital city, it’s going to be a little pricey. If you’re on a budget, head a couple of streets back from the main tourist spots, and there are some great eateries to be found.

Also, I find with dishes like pasta and pizza, these are usually reasonably priced.

Places like the Pantheon, St Peter’s Basilica and other places of worship are free to visit.

What's it like discovering the city? Is it walkable? do you need to use public transport? did we leave with weary feet?

We walked everywhere in Rome; it is easily walkable and reasonably flat. Just plan your days out to cover specific regions each day.

If your time is limited there are little electric buses that travel around the historical centre. They are really handy and convenient.

It has to be the Colosseum; it is breath-taking and a remarkable piece of history. I also love searching out Rome’s piazzas; you never know what you will discover around the next corner.

Personally, I would avoid the summer months; the first time we visited was in the month of August, the weather was hot (as to be expected), and it was busy. Spring is ideal.

For me, it's a mix of the food, and al fresco dining, with views overlooking amazing, historic architecture. I know it's a really touristy thing, but a lunch overlooking Piazza Navona is something special. Sure, you may pay a euro or two more for the experience, but it's worth it.

It has to be the crowds. Some careful planning needs to go into visiting the Spanish Steps, the Trevi Fountain & the Colosseum. As Janis said the time of year is also essential. Rome is perfect for that spring, or autumn, break.