We woke up to another bright Autumnal day and Gary and I decided to head to Kent’s charming coastline.

Armed with our English Heritage cards rather than our bucket and spades, we set off to discover Deal and Walmer Castle.

Deal Castle was built by Henry VIII between 1539/40 and was part of a chain of coastal artillery forts, which formed part of the King’s “Device Programme”.

Concerned by the threat of invasion from France and the Holy Roman Empire (which he had brought upon himself). Henry VIII had three castles (Walmer, Deal & Sandown) built along with earthwork defences in between to protect the Downs.

How to get there

You can catch a direct train from London St Pancras to Deal Station. Additionally, if you also wanted to visit Walmer Castle, this is on the same train line and the stop after Deal. Free parking is available on site.

Although Deal castle doesn’t sit on high ground, its main defences were a keep, six large outer and six inner circular stone bastions and a moat encircling it.

This level of protection allowed sixty-six artillery firing positions around the castle.

Entrance to Deal Castle for an adult is £8.00 (2019) or free if you're an English Heritage Member

Although the living quarters in Deal Castle were improved during the 18th & 19th centuries, it never quite stood the test of time like Walmer, its sister castle along the road. Which became the home of the “Lord Warden of the Cinque Ports”.  William Pitt the Younger during the late 18th & early 19th Century. Then during the 19th century, the Duke of Wellington resided there and also passed away in Walmer Castle.

If you're intrigued by Kent's weird and wonderful history, or all unusual stories around the county, then take a peek at "Kent's Strangest Tales".

You won't be able to put it down, you can pick it up for your Kindle or in good old paperback. 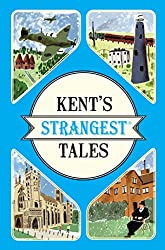 What is great about Deal Castle is that the whole fortress is open for you to explore. Climb to the uppermost point of the bastions and wander around the top for some stunning views across the English Channel.

Once you have manoeuvred yourself around the cannons, head down through the fort and enter the dark passages beneath the bastions, these are great fun for the kids.

You’ll be wandering through four-hundred-year-old passages, which encircle the castle.

As you step back up through the narrow corridors, to the next level, you’ll enter the living quarters, complete with stone ovens and charred fireplaces.

Children’s interactive activities can be found on this level, and also a large map of Europe depicted during the 16th Century, are amongst some of the exhibits here.

Continuing to the highest level, to the captain’s first-floor residence, read the varied historical stories of the people who lived and worked at the castle.

... been tempted to venture to the seaside to discover Deal Castle and its battlements for yourself?

Want to see Henry VIII's legacy on the Kent coast?  There's a lot more to see & do at Deal, and it's an ideal base to discover the eastern coastline of Kent.

The tales of our travels old & new, far & wide.

We want to explore by land, sea & air and share with you our experiences along the way.

The story of how two Londoners decided we had something about our exploits we wanted to share. (Would you like to know a little more?)
As an Amazon Associate we earn from qualifying purchases.