Thousands of years at your fingertips

The Mediterranean island of Cyprus has an incredible history on its shores. The alluring coastal city of Paphos in the southwest is awash with ancient ruins. Not only will you be basking on the Blue Flag beaches in Paphos with miles of shimmering azure ocean at your feet, but you can also embark on a voyage of discovery around its necropolis.

The ‘Tombs of the Kings’ along with Nea Pafos Archaeological Site, located nearby Paphos harbour and castle, formed part of Paphos’s UNESCO World Heritage Site and was inscribed in 1980.

Visiting the ‘Tombs of the Kings’ was magnificent and has been one of the most extraordinary €2.50 I’ve ever spent. You must allow a couple of hours to fully explore the underground necropolis and catacombs.

Why not Pin it for later?
The remains of Tomb 6

Where are the ‘Tombs of the Kings’

How to get to there

- By Air
Here are your UK departure options for Jet2 flights to Cyprus;

Unearth the ‘Tombs of the Kings’

Never underestimate what lies below the earth beneath your feet.

The ancient ‘Tombs of the Kings’, officially known as Kato Paphos necropolis (Tafoi ton Vasileon), dates from the early Hellenistic period (3rd-century BC) and through the Roman era. Burials continue to take place up to the 3rd-century AD.

A large complex in the Tombs of the Kings

Firstly, a bit of a spoiler alert as actually there are no Kings buried here. The name comes from the grandeur and majesty of the vast burial ground.

The cemetery was used for Paphos Aristocracy and their families, noblemen and local officials. The necropolis was needed for the principal residents of the Nea Paphos further south by the harbour. The incredible prehistoric ruins can be visited nearby Paphos Castle.

A pathway between the catacombs

Carved out of solid natural rock

Explore the burial chambers and crypts
When you initially stroll through the historic site, you are met with the first underground burial chambers. I am just astounded by how open and accessible they are. There are almost no restrictions whatsoever; you are free to wander at your own caution.
The first catacomb
Stepping down into the chamber tomb, it becomes dark and quite eery. This first catacomb has individual chambers carved into the bare rock; it is incredible and eases you into the magnificent tomb complexes that are to come.
Inside the first catacomb
Wandering closer to the ruins, the tree-lined gravel pathway leads you nearer to the Cyprus shoreline. The Mediterranean Sea opens up beyond. It’s a beautiful backdrop to the thousands of years old necropolis.
The tree-lined pathway
Huge natural pieces of rock protrude from the ground and appear like massive boulders. On closer inspection, you can see that the vast majority of the surrounding rocks were dug aeons ago, and crypts are secreted inside.
A collection of boulders
As we meander around further, I’m astonished at the size of the necropolis. The catacombs are not only carved out of the solid rock above ground, but they have also excavated from the natural rock below you; it is breath-taking.

Excavations through the generations

And the work continues
There has been significant archaeological interest in the ‘Tombs of the Kings’ since the 19th century. The site’s existence has been known for centuries. The Italian-born archaeologist Luigi Palma di Cesnola undertook several excavations and is believed to have looted the tombs.
Carvings in the Tombs of the Kings

During 1915 and 1916, Markides, the curator of the Cyprus Museum, excavated some of the shaft tombs. However, the first major excavations were carried out from 1937 to 1951 by Loizos Philippou.

An entrance to an underground catacomb

The prosperity of the local aristocracy

Once again, there are no restrictions around the ancient ruins. You are free to go off and explore the hidden catacombs and passages for yourself.

There are burial chambers everywhere, tomb after tomb, some of which are deep underground. A few of the principal crypts excavated are very opulent and portray prosperity for their time.

Open-aired, peristyle atriums were built surrounded by pillars and Doric columns. The burial chambers and vaults were dug out in areas leading off the atrium. I found it inconceivable that these tombs were carved into the surrounding natural rock.

It is believed that the walls surrounding the burial chambers were initially covered with frescoes; however, little evidence of this remains.

There are similar ancient tombs found in Alexandria, Egypt, signifying the close relations between the two cities during the Hellenistic period.

Looking down to Tomb 3
Tomb 3 is really quite breath-taking. The daylight shining through it genuinely makes it magical. It is astonishing when you view it from above and see the pillars supporting the porticoes. And even more so when you step down through the dark passageway to the atrium below and see the Doric columns face to face.
Inside Tomb 3

Tips on visiting the Tombs of the Kings

The sites are partially wheelchair accessible.

The ‘Tombs of the Kings’ is open all year round, excluding some public holidays.

In my opinion, you will need to allow at least 2 hours to explore the ancient catacombs as it is incredibly fascinating.

Our video of 'The Tombs of Kings'

We have created a little YouTube video of  'The Tombs of Kings'. Why not take a look?

Venturing off with Jet2holidays to Paphos

The perfect way to relax and enjoy Cyprus

If you choose the driving option, you can book your car parking through the Jet2 Extras website, and you’ll also get a discount. 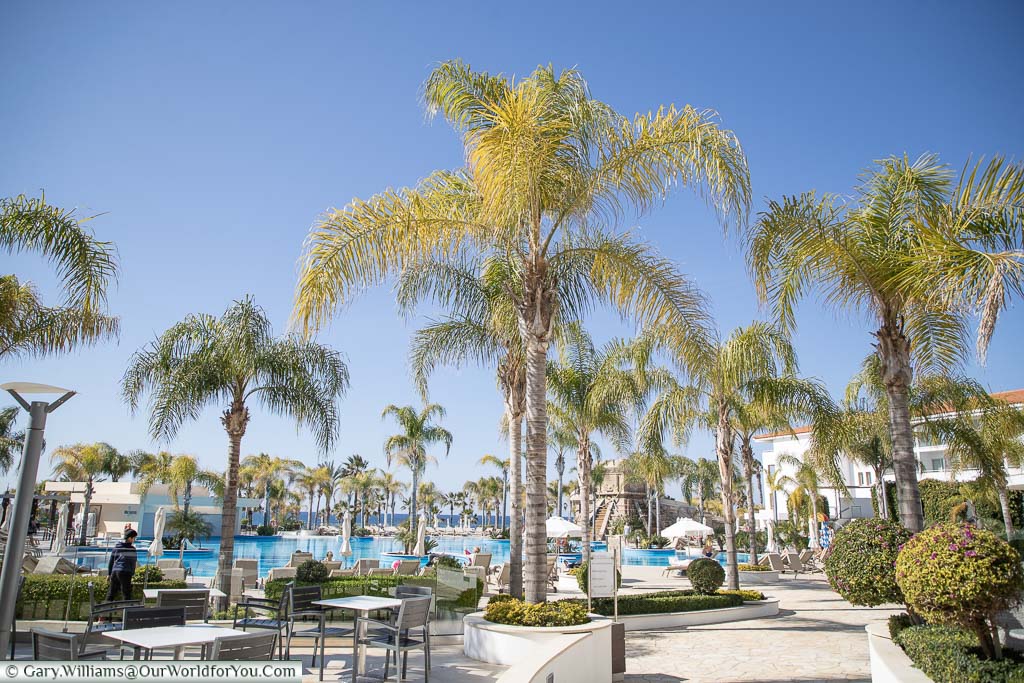 The pool area of the Olympic Lagoon Resort, Paphos

Our experience during our Jet2 flights to Cyprus was incredibly smooth and stress-free.
When you hop off your flight at your chosen destination, you’ll have the comfort of knowing that your hotel transfer awaits. Also included in your package holiday to Paphos, you’ll have a generous baggage allowance of 22kg and a hand luggage allowance of 10kg.

If you wish to make the whole in-flight experience even less stressful, you can pre-book your seats and meals for a charge.

Additionally, ensure you download the Jet2holidays app; it is effortless to manage your booking.

If your perfect break is relaxing under palm trees by the poolside of a stunning all-inclusive beachfront resort, we highly recommend the 5-star Olympic Lagoon Resort Paphos with Jet2holidays.

The beautiful Olympic Lagoon Resort surpassed all our expectations, from the moment we stepped through the doors and observed the ocean view beyond until we said our final farewells to the ancient city of Paphos.

This was our first adventure on an all-inclusive holiday with Jet2holidays, so it would be a new and enjoyable experience all around.

If you want to discover more of Cyprus, then why not check out our post 'Escape to the winter sun in Paphos, Cyprus.'

Stroll along the coastal path to the harbour, explore its historical sites, or even pick up a car with Jet2 Extras and venture further afield.

Escape to the winter sun in Paphos, Cyprus

We were invited to Cyprus as guests of Jet2holidays to stay at the Olympic Lagoon Resort Paphos. However, all our views, opinions and personal experiences are our own.

Would we recommend a winter sun stay at the Olympic Lagoon Resort Paphos with Jet2holidays? Unequivocally yes, we would return tomorrow. You instantly start to unwind and feel a wave of relaxation flow through you.