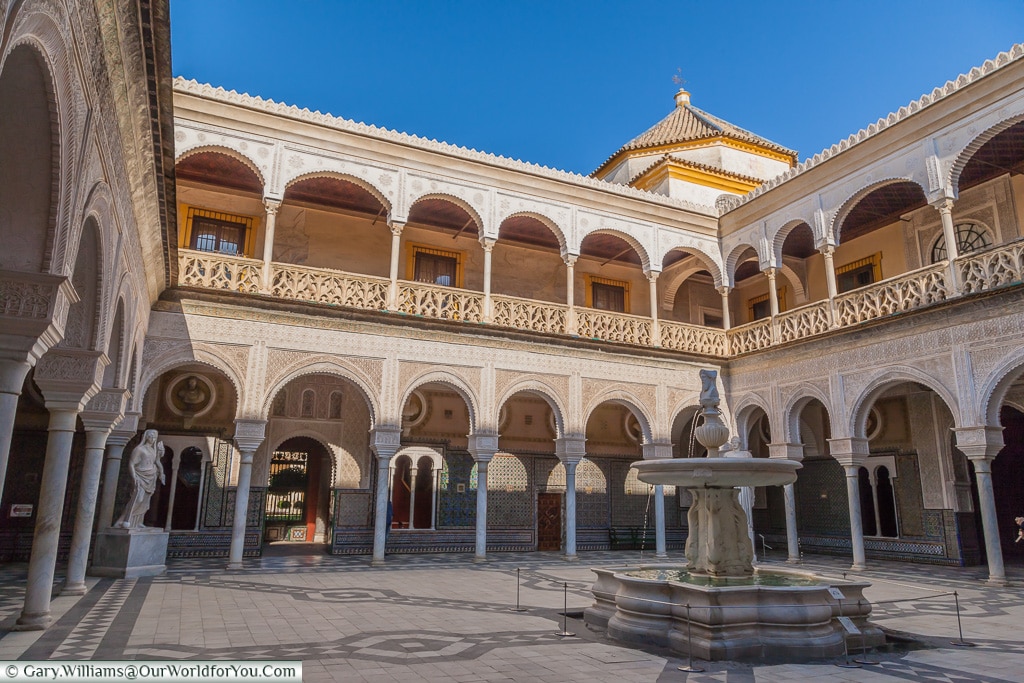 Once you have visited Seville you’ll be dreaming of when you next return. This was our 3rd time to this captivating city in Andalucía. It's also our 5th destination on our 2016 Spanish road trip. We had only been to Seville the previous year, but we would not have forgiven ourselves if we didn’t visit one of our favourite destinations.

For you to truly get the most out of Seville, it is a matter of donning those comfy shoes and start strolling. Of course, you need to visit the enchanting Alcázar and the stunning Cathedral, which were both added to the UNESCO World Heritage List in 1987. But ambling through the streets of Barrio de Santa Cruz for me is equally captivating.

Once you have visited Seville yourself, I’m sure you’ll have your own list favourites, but these were ours.

Not because it is free of charge, it is just an amazing mixture of architecture. The Moorish and Art Deco styles that blend into the whole Plaza are intriguing.

What I particularly like are the tiled Provincial Alcoves that encompass the square and allow visitors to sit and relax and chat about memories of their home provinces.

In the heart of the old town, this truly is an amazing piece of Moorish architecture. The courtyards and gardens are a pleasure to wander through, the intricate detail all through the Alcázar is stunning. 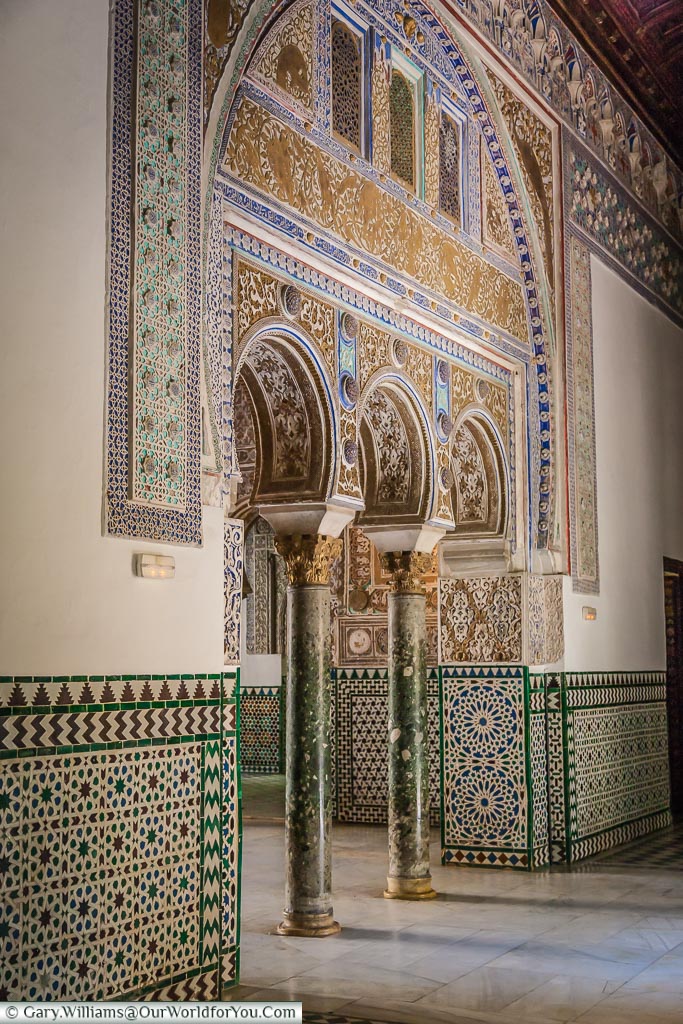 Plenty of time needs to be given to ensure this stunning palace is given the justice it deserves. If you can arrive early then do so, or even pre-book, this Royal Palace gets very busy.

Is an amazing site, it's the largest Gothic Cathedral in the world and is a stunning centrepiece to Seville. Built in the early 16th century it has 80 chapels within it and huge imposing pillars, its also the burial site of Christopher Columbus. 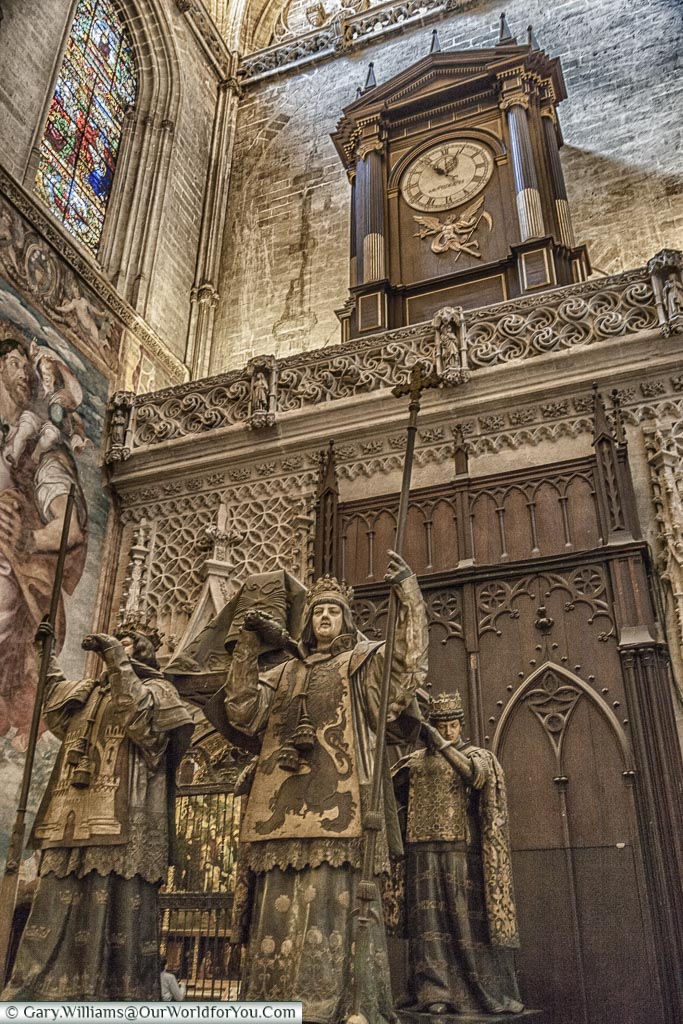 The Giralda (Bell Tower) which stands 105m tall, was a former minaret and was built to resemble the minaret Koutoubia Mosque in Marrakech. 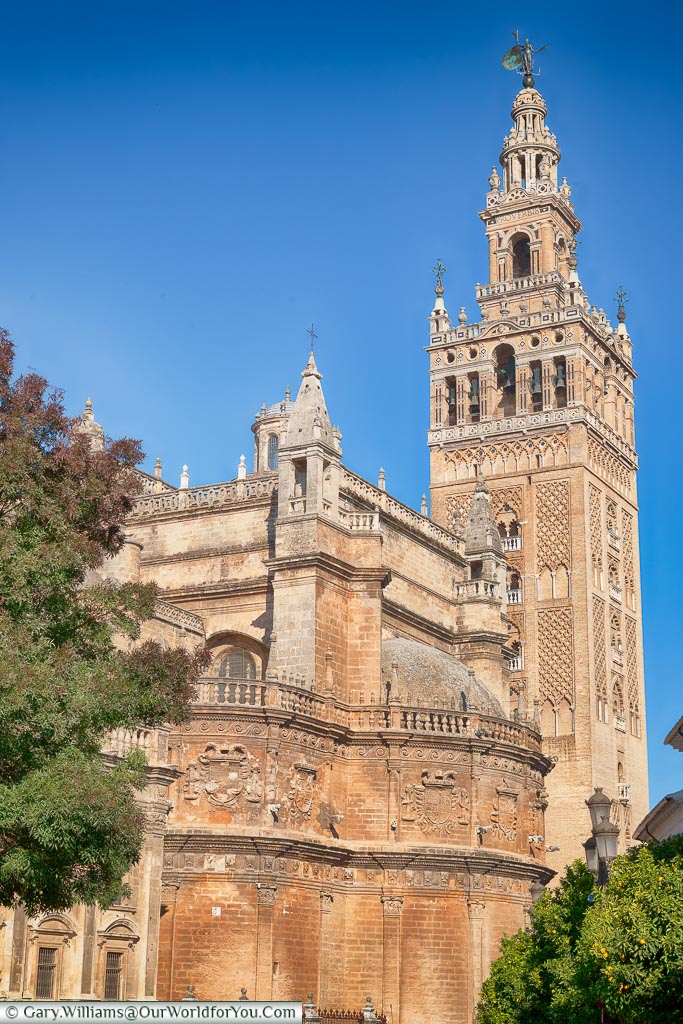 Ahhh the call of Andalucía, I love nothing more than planning a trip and so often I use the DK Eyewitness books. I find them extremely informative, easy to follow and the pictures and maps tempt you into discovering more.

We used a previous version of this book to plan our southern Spanish road trips, now you can grab the revised copy.

Seville’s bullring, not quite everyone’s choice, but equally this is part of Spain’s rich history. This 12,000 seater bullring built in a Baroque style is adorned in the traditional colours of gold, red & white.

When you step inside the imposing arena it really is quite breath-taking. A guided tour is given, although you are not allowed onto the arena floor, as you are at Ronda’s bullring.

Seville’s old town. After Plaza de España, this is my favourite part of Seville. When strolling the lanes during the day you’ll be amazed how many plaza’s and courtyards you come across, convincing yourself that you have been that way before. Then of an evening they really do look similar, we got lost heading back to our hotel the first night in Seville and was assisted by a kind gentleman. 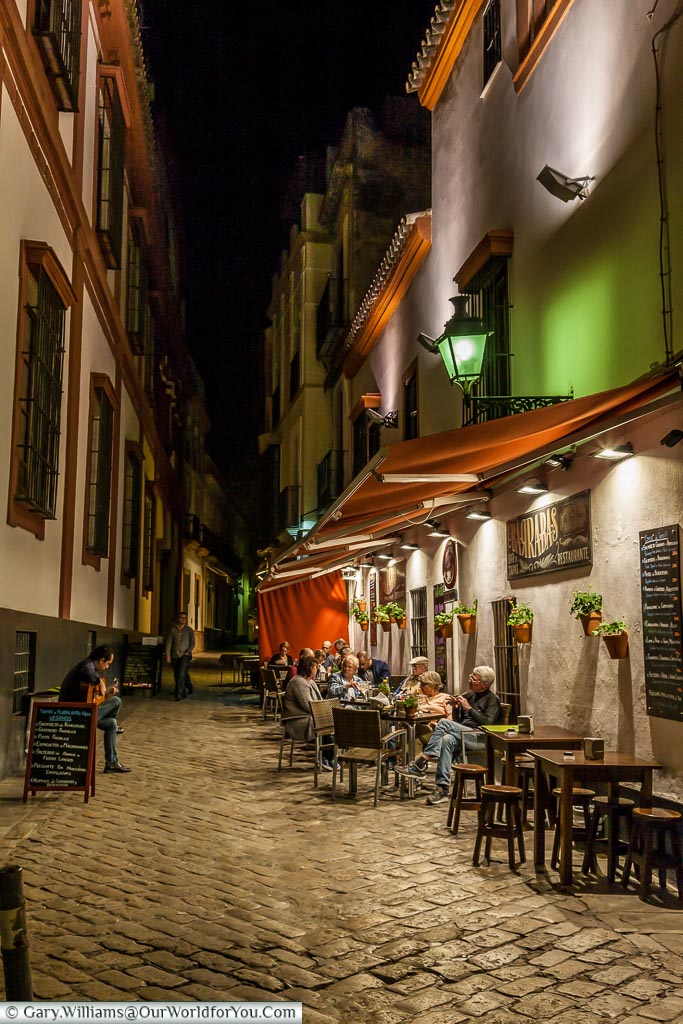 Start creating your own Spanish adventure and discover its historical towns and cities for yourself, easyJet & British Airways are just a couple of options.

Which is on the opposite side of the river to Seville is home to a one of Seville's Mercado's, which are always a pleasure to wander around. Historically Triana is known for its pottery and ceramics and if you have a little stroll around its cobbled streets, some evidence of this can still be found. Triana likes to have its own identity from Seville and there are noticeably less tourists. Take a stroll along Beris Street by the river and you will have some lovely views back over Seville.

Or Sevillia Mushrooms, you either like it or loathe it. This wooden structure constructed in the old quarter of Seville was completed in 2011. Apparently it is the largest wooden structure in the world. 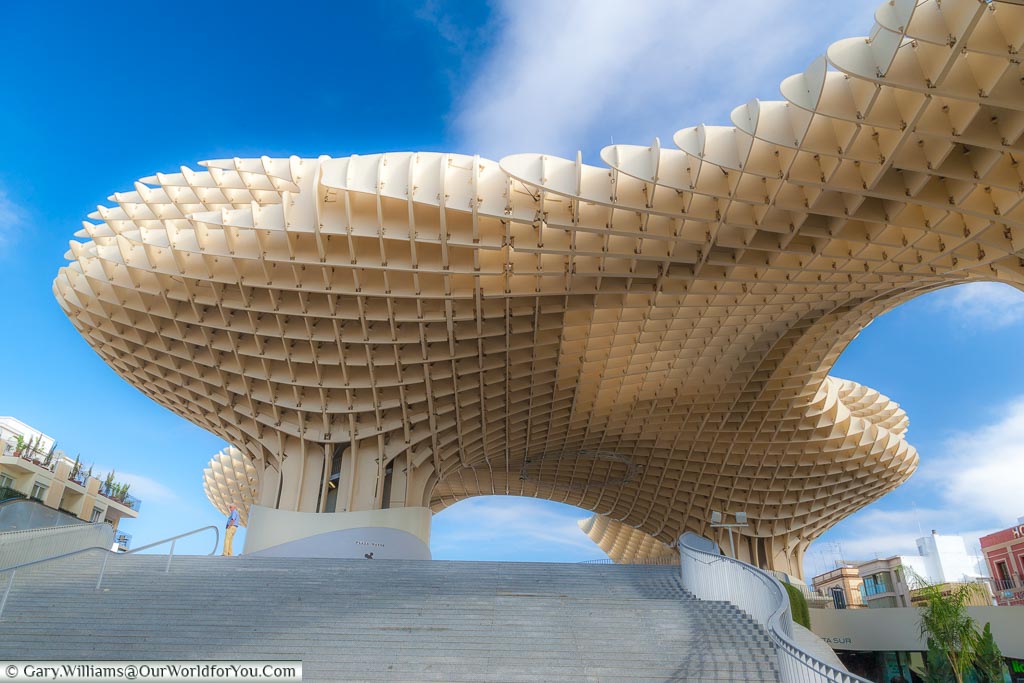 Built over 5 floors, the first level offers views over the Antiquarium and is also where for a small fee you catch the lift to the top floor. Where you can wander around and enjoy the wonderful panoramic views over the city of Seville. Perhaps you may not be into shopping, but around the streets of Calle Sierpes, you will be protected from the sun by the draping parasols that adorn the lanes. Casa de Pilatos in Plaza de Pilatos is a smaller alternative to the Real Alcázar, but without the queues. It was built between the 15th & 16th Centuries, and is the permanent residence of the Dukes of Medinacelli. The courtyard and gardens within the Palace capture its blend Mudéjar Spanish and Renaissance styles. Is a large bustling garden square and lined with tapas bar and restaurants, it’s a lively part of the town and a prominent meeting place for locals.

The square built in 1574 has two pillars at each end, the southern pillars which Hercules and Julius Caesar stand upon are originals, from a Sevillian Roman temple.

The two at the north part of the square are reproductions as one pillar collapsed when removing it from the temple, these two pillars support a lion and a shield.

Mmmm, Seville is located fairly close to Jerez the spiritual home of sherry and where we first experienced the pleasure of how sherry should taste. Not just the dark sticky drink that is dusted off at Christmas. Give it a go there will definitely be one variety that you will enjoy. 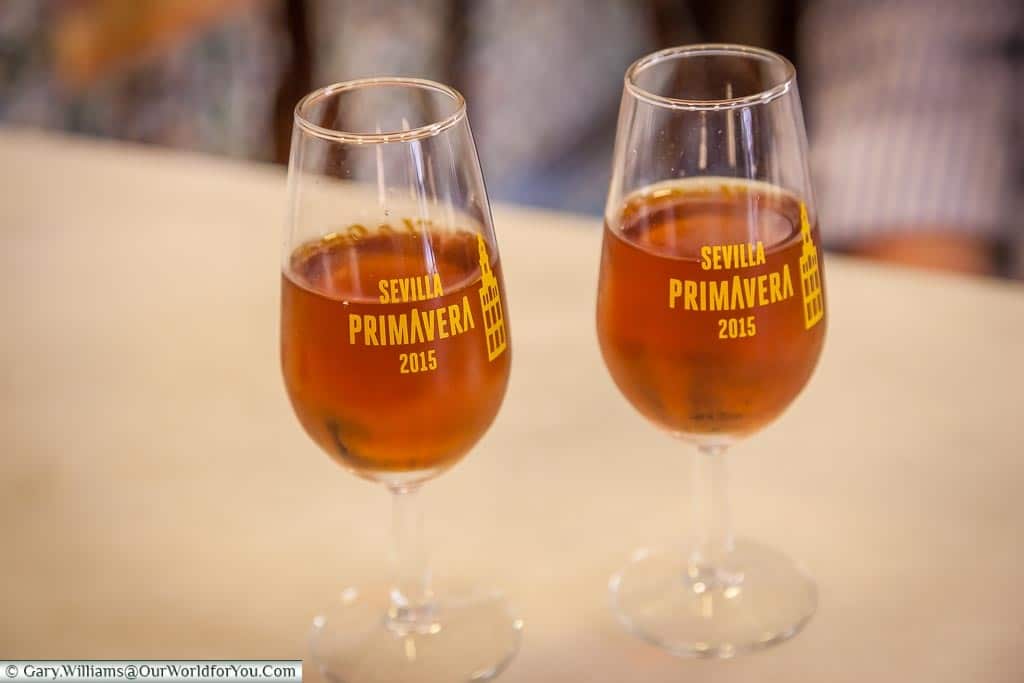 Since returning to this region of Spain we have partaken in the refreshing Tinto de Verano or ‘summer red wine’, made from 1 part red wine, 1 part gaseosa (La Casera is the most popular), topped with ice and a slice.
Also, we were introduced to Vino de Naranja, similar to sherry but with an orange flavour (well it would be in Seville). I would say a bit of an acquired taste, not my cup of tea, Amongst the narrow lanes of Barrio Santa Cruz you will find a lovingly tiled square of Plaza de Doña Elvira.

Overlooking this tranquil shady plaza we found the restaurant La Cueva, which served one of our favourite dishes 'paella' al fresco style.

Although the spiritual home of paella is Valencia, (where we have also enjoyed it), it was a too good of an opportunity to let go.

Discover more of Spain, its historic town's & cities, the vast countryside. You can do it all on a road trip, SIXT car hire cover all budgets and allow you to pick up and drop off at different destinations.

You can’t go to Spain and not indulge in this. We did but no longer have the photographic evidence, honestly 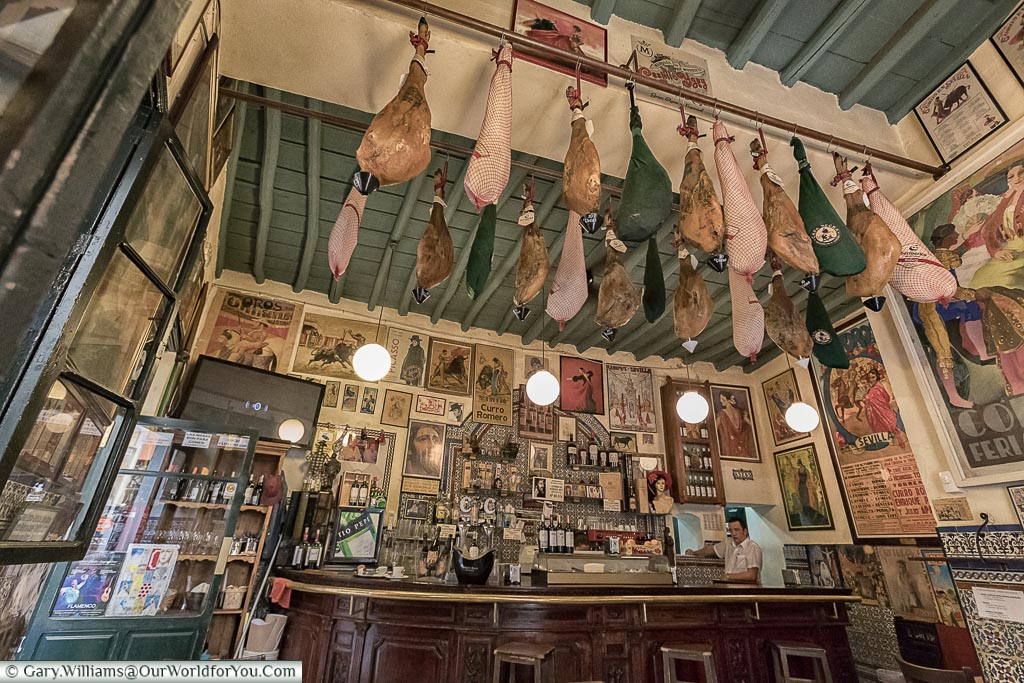 Casa Placido, our treasured tapas bar in the heart of Barrio Santa Cruz. This is where the decision was made to take the leap of faith into travel blogging. Our favourites are the albondigas, pork lomo and patatas bravas. 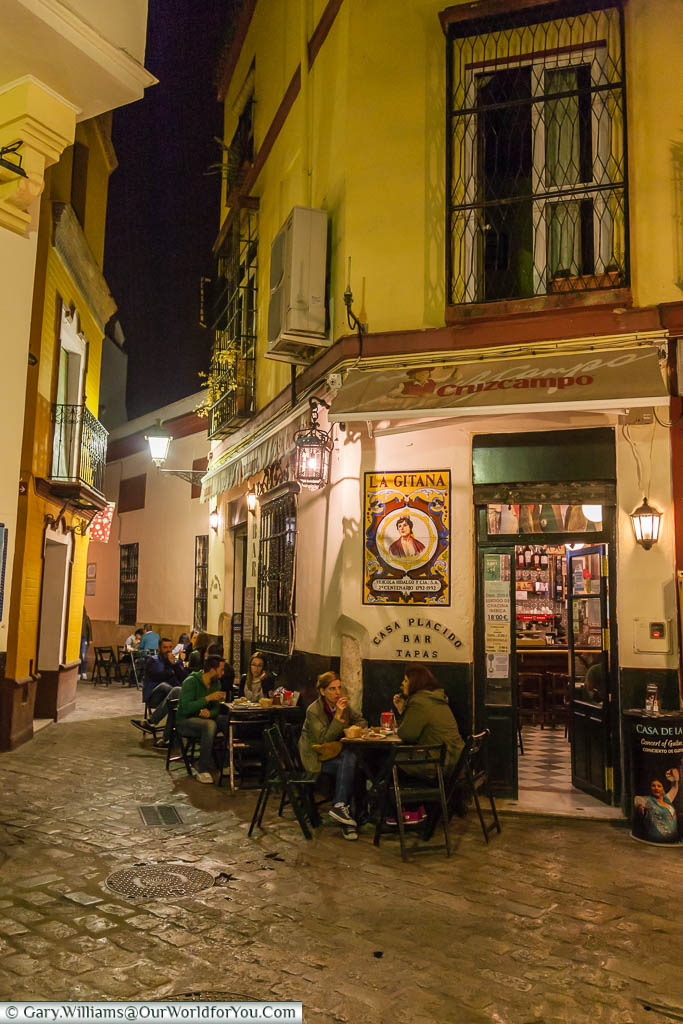 We always enjoy having breakfast in a local café and our favourite combination is tostada con tomate, café cone leche & zumo de naranja, a great way to start the day.

You may not always want to avoid the hustle and bustle of your average tourist, so soak up the welcoming atmosphere along Calle Álvarez Quintero or Calle Mateos Gago. Our accommodation for the 3 nights we were in Seville, was at the Sevilla Central Suites Apartamentos Puerta Jerez. We chose this lovely apartment which had underground parking, mainly for its location as it was just around the corner from Real Alcázar, so extremely central for discovering Barrio Santa Cruz.

The apartment itself was fantastic and the staff were really helpful in guiding us to less obvious places to discover in Seville.

The next step on our road trip was Cordoba, still within Spain’s Andalusia region and a new town to uncover.

Something from Get Your Guide?

Why not check out what else is on offer through Get Your Guide.

(These options are provided by GetYouGuide.Com. We will earn a small commission, at no extra cost to you if you book through our site)

Been to Seville? What's your highlight? Mini-break or part of a road trip? Or do you call this magnificent city home?

And why not? This amazing place is one of our absolute favourites. 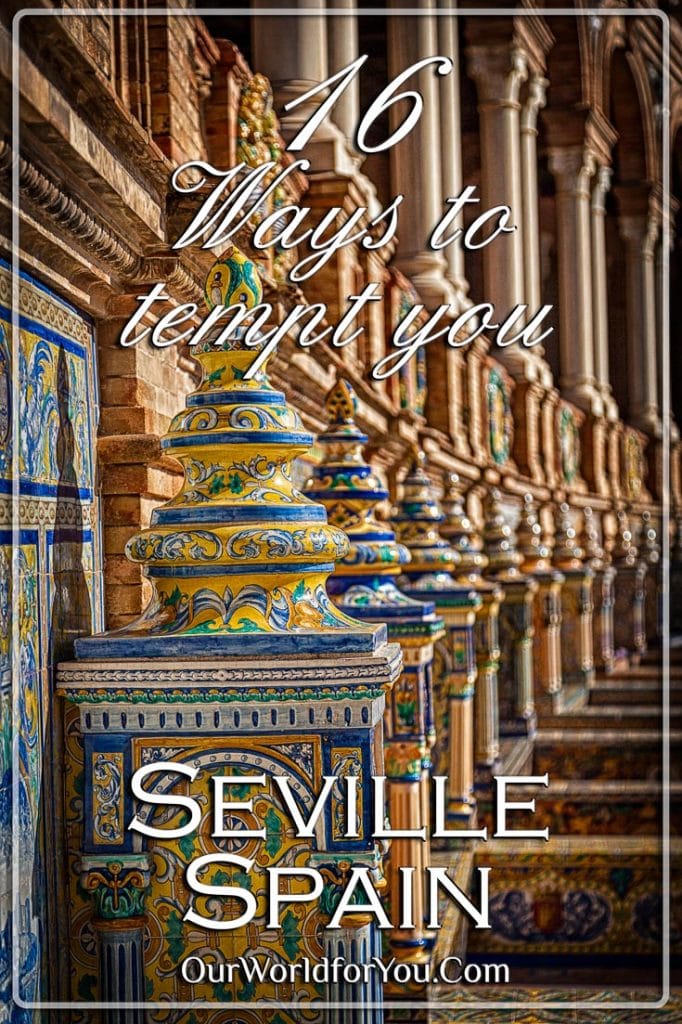